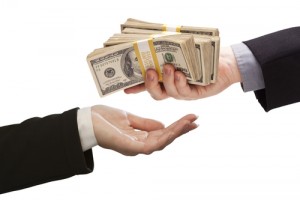 The law firm Cadwalader, Wickersham & Taft is imposing temporary pay cuts and pausing partner distributions because of the financial effects of the novel coronavirus crisis.

The pay cuts will continue for the length of the crisis, which the firm estimates to be four months in length.

Partners and senior counsel will also “make a significant financial sacrifice,” said the memo by Cadwalader managing partner Patrick Quinn. “For instance, the partners have been told not to expect any distributions during the peak months of the crisis.”

The cuts are effective Wednesday. Normal compensation will be restored “as soon as circumstances permit.” The law firm has offices in Charlotte, North Carolina; Washington, D.C.; New York; London; and Brussels.

Above the Law learned of the cuts through tipsters. The New York Law Journal and Law360 also had coverage.

Quinn explained the reason for the cuts in the memo.

“We have taken a hard look at the potential financial impact that COVID-19 will have on our firm,” the memo said. “Despite how busy some of us are with urgent client needs at this moment, even the most benign reasonable projections make clear that firm revenues and billable hours are likely to be reduced during this crisis.”

The memo said firm management has a responsibility to “safeguard the vitality of our law firm.”

“The longer we wait to take action in response to the virus, the more difficult it will be for us to avoid much more drastic measures later on,” the memo said. “As a result, we must take a number of necessary steps at this time for the collective good and to ensure that we come out the other side on very sound footing.

“In examining various options, we placed a high priority on protecting the jobs of our staff, both legal and nonlegal. Our first priority during this difficult time is to do our best to avoid any layoffs.”

The announcement comes after two other BigLaw firms also took steps in response to the COVID-19 impact.

At Womble Bond Dickinson, the impact has led to layoffs, furloughs and temporary pay cuts of 10% or less. At Reed Smith, partner distributions are being reduced “in the near term.”

Another law firm taking action is Marshall Dennehey Warner Coleman & Goggin. The firm announced Monday that it will suspend its 4% employer 401(k) match until next year, the Legal Intelligencer reported.