US Capitol statues will honor Justices O'Connor and Ginsburg 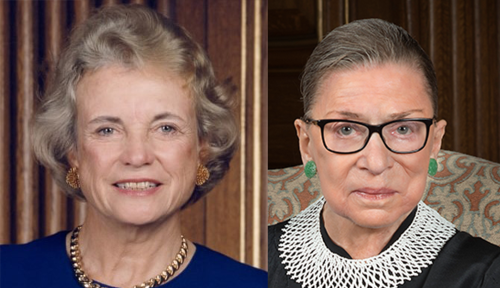 The first and second female justices on the U.S. Supreme Court will have statues erected in their honor at the U.S. Capitol as a result of a bill signed into law last week by President Joe Biden.

The Arizona Republic had coverage when the bill passed the U.S. House of Representatives on a vote of 349-63 in late March. The U.S. Senate had passed the bill by unanimous consent in December 2021.

O’Connor was appointed to the Supreme Court in 1981. She retired in 2006 because of her husband’s Alzheimer’s disease. In 2018, she announced that she was likely in the early stages of the disease. Her 92nd birthday was in March.

Ginsburg was appointed to the high court in 1993. She died from cancer complications at the age 87 in September 2020 while still on the court.

The law requires the statues to be erected within two years in the Capitol or on the Capitol grounds. The law says priority should be given to an appropriate spot near the old Supreme Court chamber in the Capitol.

“As RBG said, ‘Women belong in all places where decisions are being made,’” Klobuchar tweeted. “Now, we’ll have two more reminders in the Capitol of how true that is.”