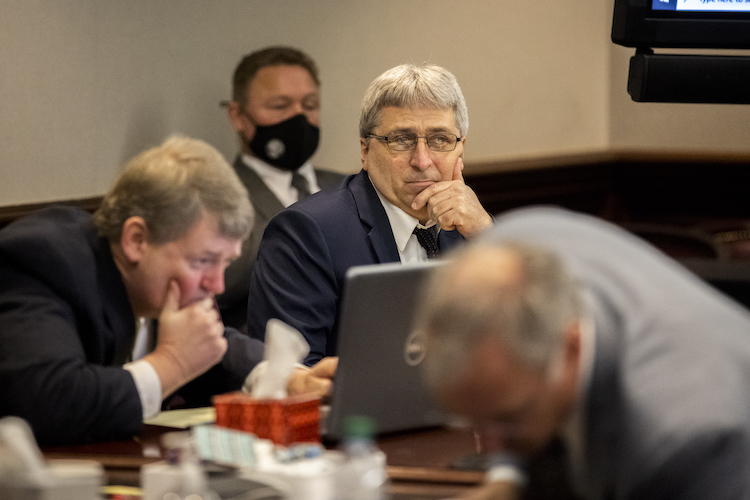 William “Roddie” Bryan, center, sits next to his attorney Kevin Gough, left, during the trial of Gregory McMichael, his son Travis McMichael and Bryan in the Glynn County Courthouse on Monday, Nov. 15 in Brunswick, Georgia. The three are charged with the February 2020 killing of 25-year-old Ahmaud Arbery. Pool photo by Stephen B. Morton/The Associated Press.

The judge overseeing the Georgia trial of three white men accused in the killing of unarmed Black jogger Ahmaud Arbery scolded one of the defense lawyers Monday for objecting to the presence of the Rev. Jesse Jackson and the Rev. Al Sharpton in the courtroom.

Judge Timothy Walmsley denied a defense motion for a mistrial and denounced preacher comments by defense lawyer Kevin Gough as “reprehensible,” report the Washington Post and the New York Times.

“We don’t want any more Black pastors coming in here,” he said. He offered a hypothetical of the prejudice that would be caused if “a bunch of folks came in here dressed like Col. Sanders with white masks.”

On Monday, Gough objected to Jackson’s presence, comparing it to a police officer or uniformed prison guards attending the trial of a Black man accused of assaulting a law enforcement officer or a corrections officer.

Gough represents William “Roddie” Bryan, who allegedly joined Gregory McMichael and his son Travis McMichael in their pursuit of Arbery and then recorded the shooting that took place during a struggle. Lawyers for the McMichaels joined in the mistrial request.

One of the other lawyers joined Gough in his contention that the presence of the preachers was prejudicial, according to the Washington Post. All three defense lawyers also claimed that crying by Arbery’s mother had affected trial fairness.

The New York Times profiled 59-year-old Gough of Brunswick, Georgia, in a Nov. 12 story. Gough’s statements about the preachers “seem to fit a pattern of provocation from a lawyer who, both during this trial and long before, seems to thrive on it,” the New York Times reported.

Gough’s demeanor “most closely resembles that of an aw-shucks country lawyer character from the movies, with a voice that honks and drawls and tends to ladle on the folksiness,” the New York Times said.

“But Mr. Gough’s presentation is, like so much about him, confounding, and sometimes contradictory. Though he attended law school at the University of Georgia, Mr. Gough grew up on Long Island. He spent a number of years heading up the Republican Party in Glynn County, (Georgia), and said he served for two years as legal director of a group called the Poor and Minority Justice Association. From 1989 to 1993, he served as a prosecutor in the local district attorney’s office. For four years starting in 2012, he represented the poorest defendants in his community as the Brunswick Judicial Circuit public defender.”

Gough was fired from the public defender post after he was accused of retaliating against an employee who accused a co-worker of sexual harassment. He was also accused of engaging in a “media campaign” against the district attorney, accusing her of being too close to police and filing cases too slowly. He had also criticized the court for being run as a “debtors’ prison” because of fees imposed on poor people.

The NAACP’s local chapter had supported keeping Gough as the public defender.

The prosecutor Gough had targeted was Jackie Johnson, who was ousted by voters before she was charged in September with violating her oath as a public officer for allegedly favoring Gregory McMichael, a former investigator for her office, in the Arbery case.

ABAJournal.com: “Prosecutorial ethics are in the spotlight after the death of Ahmaud Arbery”