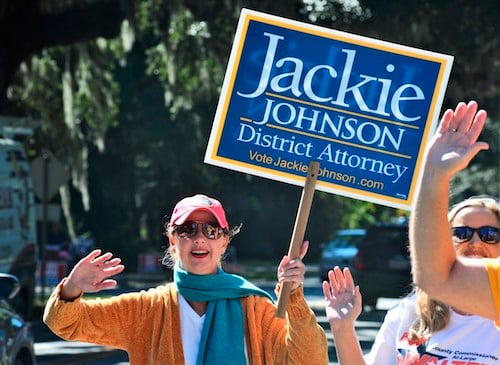 Jackie Johnson, then the Brunswick district attorney in Georgia, campaigns for reelection Nov. 3, 2020. Johnson was indicted Thursday on misconduct charges alleging that she used her position to shield the men who chased and killed Ahmaud Arbery from being charged with crimes immediately after the shooting. Photo by Terry Dickson/The Brunswick News via the Associated Press.

A former Georgia district attorney has been criminally charged over the investigation into the death of Ahmaud Arbery, a 25-year-old Black man who was chased and shot by a white father and son while running outside the coastal city of Brunswick, Georgia, in February 2020.

Georgia Attorney General Chris Carr announced Thursday the indictment of former Brunswick District Attorney Jackie Johnson on the felony charge of violating her oath as a public officer and the misdemeanor charge of obstruction of a police officer.

“Our office is committed to ensuring those who are entrusted to serve are carrying out their duties ethically and honestly,” Carr said in a news release. “While an indictment was returned today, our file is not closed, and we will continue to investigate in order to pursue justice.”

The Associated Press, CNN, the Hill and CNBC have coverage.

Carr asked the Georgia Bureau of Investigation and federal authorities to investigate local prosecutors’ handling of the case last year after a cellphone video of the shooting leaked online several months after Arbery’s death.

In the video, Travis McMichael is seen shooting Arbery with a shotgun. He and his father, Gregory McMichael, had pursued Arbery in a pickup truck after they saw him running in their neighborhood. They have since said they thought he was a suspect in several break-ins in the area.

William “Roddie” Bryan, a neighbor who joined them in the pursuit, took the cellphone video.

The McMichaels and Bryan were charged with murder and other crimes in May 2020, and as the Associated Press reports, they face trial this fall.

According to the grand jury indictment, Johnson showed “favor and affection” to Greg McMichael, who worked as an investigator in her office until retiring in 2019. It says Johnson also failed “to treat Ahmaud Arbery and his family fairly and with dignity” when she recommended the appointment of another county’s prosecutor without disclosing that she had previously sought the assistance of that prosecutor in the investigation.

Johnson had recused herself from the case, citing her professional connection to Greg McMichael.

The indictment additionally alleges that she “knowingly and willfully” hindered the duties of two police officers by directing them not to arrest Travis McMichael.

Johnson did not respond to the Associated Press’ request for comment Thursday but told the news outlet in November after losing reelection that she was “confident that when the truth finally comes out on that, people will understand our office did what it had to under the circumstances.”

If convicted, she could face up to six years in prison.

Lee Merritt, an attorney for Arbery’s mother, said on Twitter on Thursday “prosecutors must be held accountable when they interfere with investigations in order to protect friends and law enforcement.”

He also said he will “continue to pursue charges against George Barnhill who received the case from Johnson and immediately went to work attacking the character of #AhmaudArbery and making material misrepresentations of the facts involved in his brutal murder.”