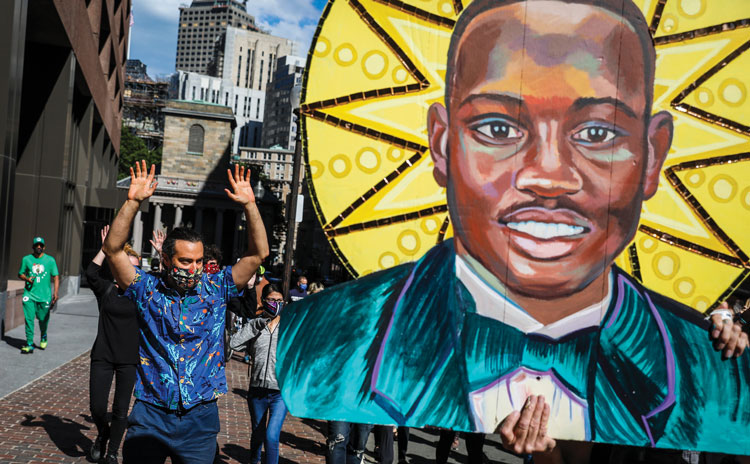 Mural artist David Fichter’s painting of Ahmaud Arbery is displayed during a protest and march in Boston. Photo by Erin Clark/the Boston Globe via Getty Images.

Three Georgia men facing state charges of murder in the 2020 death of Black jogger Ahmaud Arbery have been indicted on federal hate crimes and attempted kidnapping charges. Two of the defendants, 35-year-old Travis McMichael and his father, 65-year-old Gregory McMichael, are accused of arming themselves and chasing Arbery through a neighborhood in Brunswick, Georgia, resulting in Arbery’s death. The third defendant, 51-year-old William “Roddie” Bryan, is accused of joining the chase and cutting off Arbery’s route. (Department of Justice press release, the April 28 indictment, the New York Times, the Associated Press)

Two of President Joe Biden’s nominees for federal courts of appeals defended their representation of controversial clients in criminal cases during confirmation hearings Wednesday before the Senate Judiciary Committee. The nominees, both Black women with experience as federal public defenders, are U.S. District Judge Ketanji Brown Jackson, nominated for the U.S. Court of Appeals for the District of Columbia Circuit; and Candace Jackson-Akiwumi, a Zuckerman Spaeder partner nominated for the 7th U.S. Circuit Court of Appeals at Chicago. Jackson represented an accused terrorist, while Jackson-Akiwumi represented an accused gun trafficker. (The New York Times)

Lawyer Evan Greebel has given up his law license following his conspiracy conviction in connection with his representation of jailed drug company CEO Martin Shkreli. Greebel was formerly an income partner with Katten Muchin Rosenman. He was convicted in January 2018 for helping Shkreli pay off investors who lost money in his hedge funds with assets from the drug company Retrophin. Prosecutors said Greebel used fraudulent settlements and consulting agreements to transfer the money. (Law360, Law.com)

The 9th U.S. Circuit Court of Appeals at San Francisco has refused to interfere with a Trump administration decision that allows publication of blueprints for 3D guns. The prior administration had allowed publication by removing munition export controls on 3D guns. The appeals court said federal law bars judicial review of decisions to remove items from the list of munitions that require a license to export. (Courthouse News Service, Law360, the 9th Circuit Court decision via How Appealing)