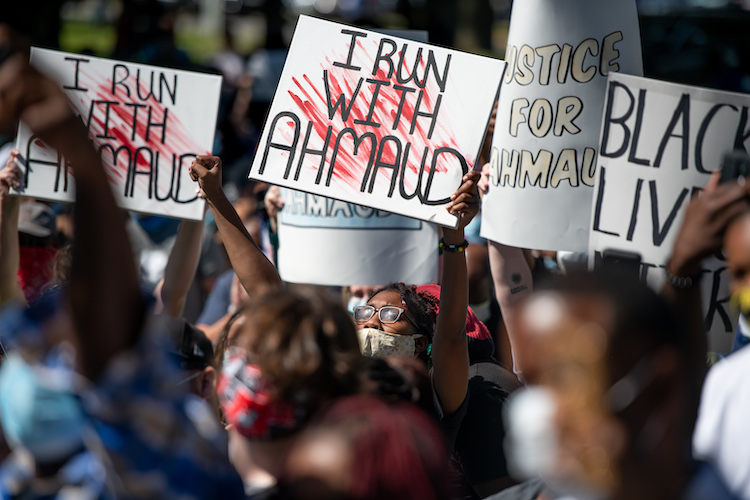 Ahmaud Arbery and Breonna Taylor are the latest high-profile deaths in a spate of never-ending hashtags. Two recent victims of America’s epidemic of extrajudicial killings of unarmed black men and women.

Their shooting deaths are symptomatic but also revelatory. Their cases may not even have registered on the public conscience if they didn’t fit America’s cruel outrage equation: Horrificness x Public Outcry - Complexion = Justice.

The hashtag #JusticeForAhmaud was circulating on Twitter long before his Feb. 23 shooting death outside Brunswick, Georgia, made a blip on the national news radar. Corralled and shot by two white men while out jogging, in what activists call a modern-day lynching, Arbery’s case got some local traction.

Despite law enforcement attempts to sweep the case under the rug, the brazen facts surrounding Arbery’s killing created a slow burn on social media. But there’s never a guarantee that online outrage will morph into a media firestorm. Unless there’s video.

Turning the other cheek

For months, Americans have been deluged with coronavirus-focused stories, from serious daily death tallies to mundane shelter-in-place baking tips. Caught in a COVID-19 vortex, it’s been difficult to muster attention for anything else going on in the world. The pall of coronavirus and quarantine threatens to lull the country into a dangerous state of complacency.

But the sound of gunshots sure can grab attention. For Arbery, a leaked video showing the 25-year-old fighting for his life, as he is shot multiple times, propelled the case into national headlines. But why did anyone need video proof that this was a horrific crime and an arrest was warranted? The facts should have been more than sufficient.

Instead, the execution video is on an endless loop on social media, for the unwitting viewer and the curious. It’s unconscionable that photographic documentation of racial violence is the primary means of achieving sympathy, or justice, in this country. It’s lurid and voyeuristic, and it’s telling that most graphic depictions of death that appear in the media (from police, from disease, from war) are almost universally of nonwhite people suffering.

Alan Tucker, the local defense attorney who consulted with the killers and released the tape, told the New York Times that he wanted the “truth” of what happened to come out: “It wasn’t two men with a Confederate flag in the back of a truck going down the road and shooting a jogger in the back.”

No, it was three men in trucks who cornered Arbery and shot him from the front.

There was no crime; there is no justification. This wasn’t a citizen’s arrest, and it wasn’t self-defense. It was indefensible.

The “truth” of what happened is in the 911 call purportedly made by one of the suspects right before Arbery is shot. Operators ask whether there’s been a crime and get no answer. Instead, the caller responds: “I’m out here at Satilla Shores. There’s a black male running down the street.”

In the middle of the night on March 13, plainclothes police officers broke into the home of 26-year-old Louisville, Kentucky, EMT Breonna Taylor. Her boyfriend called 911 thinking it was a home invasion, grabbed his gun and fired one shot. Police responded in a hail of bullets, hitting Taylor at least eight times and piercing the walls of adjacent apartments. Taylor died within minutes.

Police had a “no-knock” warrant to search Taylor’s home for items belonging to an ex-boyfriend of hers they were targeting, who lived at a different address. Neither Taylor nor her boyfriend were suspects in the case, and no drugs or contraband were ever found on the premises. Taylor’s family has requested an independent investigation; activists started the hashtag #IStandWithBre campaign and are demanding that the officers involved are fired and charged.

The glaring disregard for black and brown lives is reflected in police attitudes and public apathy. I’ve ridden with narcotics officers on search warrants in minority neighborhoods when they’ve gone to the wrong house with bad information.

I’ve watched them casually destroy homes by breaking doors and windows to “surprise” slam people to the ground and then arrest whomever they can on minor, unrelated violations to justify their presence. It’s terrorizing, it’s dangerous, it’s bad policy, and in cases like Taylor, it can be fatal.

At the same time, we’ve all seen white criminals who’ve committed violent acts, or even atrocities, walk away from police standoffs unscathed, peacefully taken into custody. We’ve watched white militants taunt law enforcement armed with rifles and automatic weapons without consequence, intimidate lawmakers in the streets with guns—in Michigan, Wisconsin, Arizona—all knowing that they are safe in their skin color.

Meanwhile, police riddle a black first responder with bullets in her own home, then charge her boyfriend with attempted murder of an officer because he defended his home. Two white men gun down a black jogger in broad daylight and nothing happens.

“When you juxtapose that, and you have a black person kill a white person, that is the quickest way to death row in America,” says Crump, who authored, Open Season: Legalized Genocide of Colored People.

Gunning down Arbery and Taylor required a sense of empowerment and impunity, enabled by a conviction that not only would there be no repercussions, but it’s likely there would be no interest.

Lenient open carry laws, “citizens arrest” and “stand your ground” laws are corrupted and abused. A legacy power structure in the South and a tolerance of police brutality nationwide results in a lack of accountability.

Change must come, not just through outrage but by powerful, countervailing forces. Every state needs strong and enforced hate crime laws, prosecution of police officers who abuse their power, and top-down political resolve that this will not be tolerated.

The Department of Justice must aggressively investigate and prosecute what are de facto civil rights violations. Killers must not be allowed to slip through the cracks because of color or uniform, and we cannot apply the law selectively in America. That will equal justice.