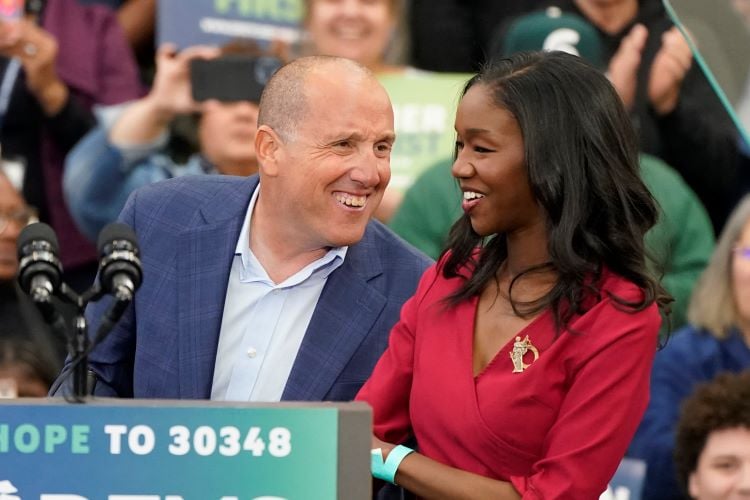 Michigan Supreme Court Justice Richard Bernstein, left, and then-candidate Kyra Harris Bolden at a rally in October 2022 in Detroit. Bolden is a new justice on the Michigan Supreme Court and has picked Pete Martel, an ex-convict, as a key aide. Martel has resigned from his position as a clerk for Bolden. Photo by Carlos Osorio/The Associated Press.

A former inmate convicted for robbing a store and shooting at a police officer has resigned his new job as a law clerk for a Michigan Supreme Court justice.

Pete Martel resigned from his position as a clerk for new Justice Kyra Harris Bolden, who said Martel didn’t want to be a distraction following criticism of his hiring, report the Associated Press and the Detroit News.

Justice Richard Bernstein had told the Detroit News that he was “all about second chances,” but he didn’t think that Martel should be a clerk on the state supreme court after shooting at a police officer.

Martel had pleaded guilty to armed robbery and assault with intent to do great bodily harm in 1994, according to the Detroit News. He attended the Wayne State University Law School after his release from prison in 2008, according to the AP. He went on to work for the state’s appellate defender office as a mitigation specialist.

Bolden had been appointed to the Michigan Supreme Court to fill a vacancy. She explained her hiring decision in an interview with radio station WWJ.

“I don’t think you should be held to crimes for the rest of your life, especially crimes that were committed 30 years ago, and you have done everything possible to transform your life,” Bolden said, according to the AP.