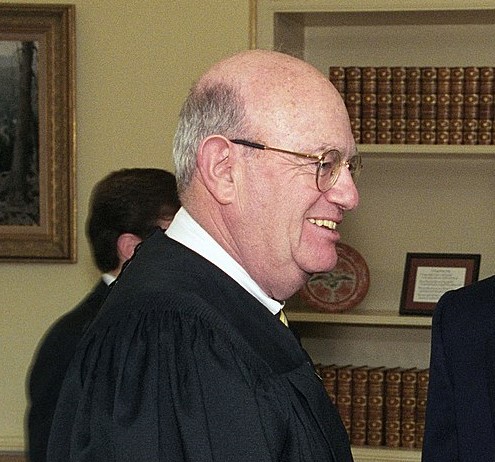 Senior Judge Laurence Silberman of the U.S. Court of Appeals for the District of Columbia Circuit in 2001. Photo by Robert D. Ward, CC-PD-Mark, via RandomUserGuy1738/Wikimedia Commons.

A federal appeals judge has posted a message to a group email list for all federal judges that expresses his dim view of noisy Yale Law School students who opposed a conservative speaker at an event by the Federalist Society.

The message was posted by Senior Judge Laurence Silberman of the U.S. Court of Appeals for the District of Columbia Circuit, according to a March 17 tweet by Slate journalist Mark Joseph Stern.

Silberman suggested that colleagues should think carefully before hiring the student protesters.

He wrote: “The latest events at Yale Law School in which students attempted to shout down speakers participating in a panel discussion on free speech prompts me to suggest that students who are identified as those willing to disrupt any such panel discussion should be noted. All federal judges—and all federal judges are presumably committed to free speech—should carefully consider whether any student so identified should be disqualified for potential clerkships.”

A federal judge told Law360 that Silberman’s post led to dozens of responses. Some expressed support. Others criticized mass emails.

More than 100 protesters showed up at the March 10 Federalist Society event that featured Kristen Waggoner, the general counsel of the conservative group Alliance Defending Freedom. Monica Miller of the progressive American Humanist Association was also on a panel.

Alliance Defending Freedom is representing a web designer who contends that she has a First Amendment right to refuse to provide online services for same-sex weddings.

The Yale Daily News described Waggoner as an “anti-LGBTQ speaker.” She was invited to the event to discuss a U.S. Supreme Court case that allowed an evangelizing student to sue his university for alleged free speech violations.

According to Original Jurisdiction, media descriptions of the protest varied.

Original Jurisdiction writer David Lat said the protesters were disruptive, but many left the classroom where the panel discussion was taking place after a scolding by the moderator. She told the students that they could stay in the classroom and remain quiet, or they could leave and continue a nondisruptive protest in the hallway.

According to information that Lat gathered from video, audio and sources, the noisy protest continued in the hallway “at varying levels of intensity.”

Waggoner commented in a March 16 Twitter post. “My hot take: Good lawyers win with civility & persuasion, not physical intimidation and threats of violence,” she wrote. “We aren’t afraid to engage with people and ideas we disagree with. Apparently many of the students missed this lesson.”

Silberman’s group email list post is not his first missive to get media attention. In an email shared with his D.C. colleagues in June 2020, Silberman described as “madness” a proposal that would have banned Confederate markers at gravesites in military cemeteries.