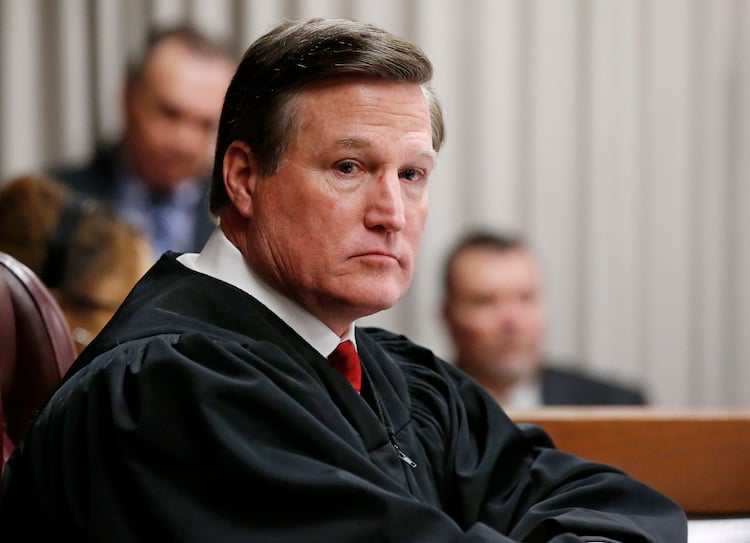 Then-Judge Tim Henderson listens to testimony in January 2016 during a sentencing in Oklahoma City. Photo by Sue Ogrocki/The Associated Press.

A former Oklahoma judge admitted to consensual “sexual conduct” with a prosecutor but said it didn’t affect his rulings in a murder case after their relationship ended.

Former Judge Tim Henderson acknowledged the relationship in a written statement submitted Monday to a court that was hearing evidence in a convicted murderer’s bid for a new trial, report the Oklahoman and News 9.

The defendant seeking a new trial is Robert Leon Hashagen III, convicted of murder in the death of a 94-year-old woman during a 2013 burglary.

“At all times during the Hashagen case I maintained my role as a neutral and detached judicial officer,” Henderson wrote. “My rulings were fair and supported by the evidence and facts presented by the attorneys.”

The prosecutor also acknowledged involvement with the judge but described it as sexual abuse. Henderson disputed that characterization, saying he received texts, phone calls, emails and cards from the prosecutor during their “consensual affair.”

The relationship included “sexual conduct in my office, in her apartment and in hotel rooms secured by and paid for by” her, Henderson said.

The Oklahoma State Bureau of Investigation began to look into sexual misconduct allegations against Henderson at the end of March based on a request by District Attorney David Prater, the Oklahoman previously reported. Henderson was suspended in March and submitted his resignation in April.

According to a request for a warrant to search Henderson’s emails, two lawyers told the OSBI that their relationships with Henderson began after he touched them inappropriately. Both women were shocked, but they remained silent about additional encounters because they wanted to protect their careers, the warrant said.