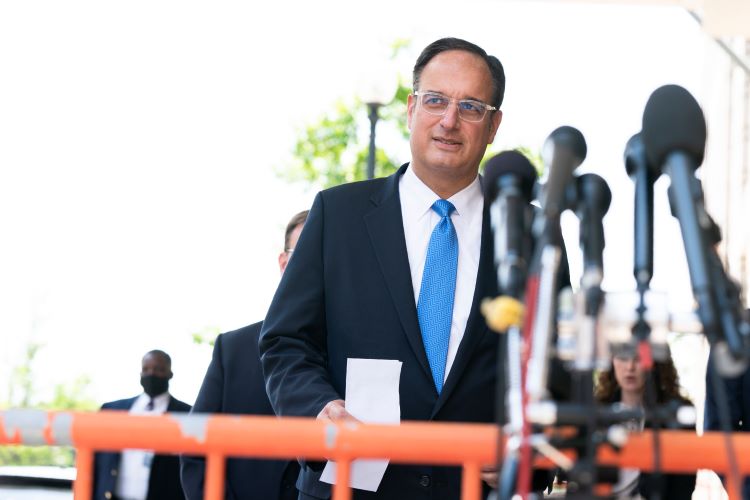 Michael Sussmann, a cybersecurity lawyer who represented the Hillary Clinton presidential campaign in 2016, outside the federal courthouse in Washington, D.C., on May 31. Sussmann was acquitted Tuesday of lying to the FBI. Photo by Manuel Balce Ceneta/The Associated Press.

Former Perkins Coie partner Michael Sussmann was acquitted Tuesday on a charge of lying to the FBI in a prosecution pursued by a special counsel appointed by former U.S. Attorney General William Barr.

The New York Times described the verdict as “a significant blow” to special counsel John Durham, who was appointed by the Trump administration, while it was described as a “major setback” by the Washington Post and ending “in defeat” by Politico.

Durham had alleged that Sussmann lied when he told the FBI in September 2016 that he wasn’t acting on behalf of any client when he brought the agency allegations about an alleged secret channel of communications between the Trump Organization and a Russian bank.

Durham claimed that Sussmann was actually acting on behalf of Hillary Clinton’s presidential campaign and a technology executive when he went to the FBI. The agency later determined that the allegations were unfounded.

According to the New York Times, Durham “used the case to put forward a larger conspiracy: that there was a joint enterprise to essentially frame Mr. Trump for collusion with Russia by getting the FBI to investigate the suspicions so reporters would write about it.”

Barr had appointed Durham to investigate any illegality in the federal government’s probe of Russian influence in the 2016 presidential election. Former President Donald Trump had touted the inquiry as a way to show that politics motivated the probe.

Sussmann’s defense team from Latham & Watkins acknowledged that Sussmann had represented the campaign and the technology executive. But the lawyers claimed that Sussmann was acting out of a concern for national security rather that acting on behalf of clients, according to Law.com and the Washington Post.

“There is a difference,” argued lawyer Sean Berkowitz, “between having a client, and doing something on their behalf.”

Sussmann’s lawyers claimed that Durham turned the 30-minute FBI meeting into a “giant political conspiracy theory,” according to Law360. They also noted that Sussman’s work on behalf of Democratic clients was well known, which would undercut any claim that the alleged lie had a material influence on the FBI investigation.

According to Law.com, “the verdict brings a measure of redemption for Sussmann, who cultivated a reputation as a thoughtful and balanced cybersecurity attorney but who has been pilloried in right-wing media as a partisan operative who worked with the Clinton campaign in an attempt to denigrate Trump.”

The case against Sussmann was the first of Durham’s cases to go to trial. Former FBI lawyer Kevin Clinesmith had pleaded guilty in 2020 to altering an email to justify surveillance of a former Trump campaign adviser.

Durham has also accused a Russian-born researcher of giving false information to the FBI, according to Politico. His trial is scheduled for October.

ABAJournal.com: “Perkins Coie partner resigns from firm after he is charged by special counsel”