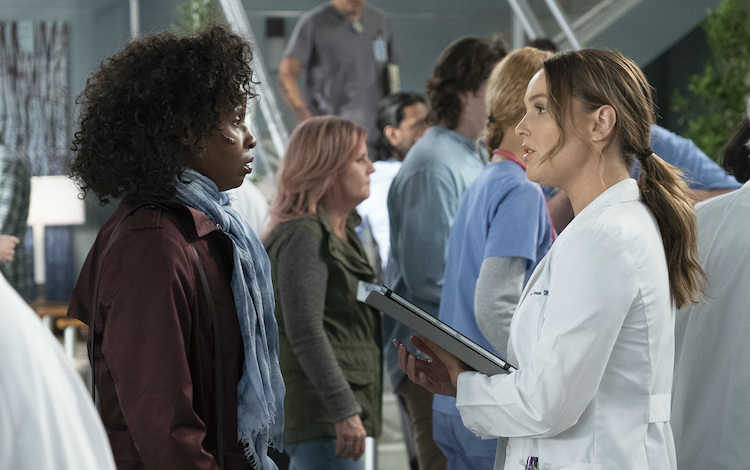 Khalilah Joi as Abby and Camilla Luddington as Dr. Jo Karev in the Grey’s Anatomy episode “Silent All These Years.” Photo from MovieStillsDB.com.

This has been one of the most challenging installments I’ve written over the almost three years the ABA Journal has been publishing my column on law and pop culture.

Now, the difficulty doesn’t stem from the subject matter of this column (as you can tell from the title, it’s relatively heavy); as a criminal defense attorney who handles major felony litigation, I’ve defended my fair share of clients against sexual assault and rape allegations. No, the difficulty is marshaling the motivation and coming up with new ideas to stoke a column in the first place.

I’m suffering just the same as many of you reading this are. I’m a creature of habit, and my world has been turned upside down as a result of this pandemic. All courthouses in my state of Oklahoma are closed to the public. If most of your time Monday through Friday is spent litigating cases, that becomes a challenging task when there is no venue in which to litigate.

I’ve done my best to stay busy. I’ve been working on a pending appeal, which helps keep my mind off the repercussions, at least to an extent. I’ve finally finished and released an acoustic solo album I’ve been working on for the last two years. I’m trying to spend more time with my toddler son, even though I continually catch myself failing to give in to the moment completely … it’s always inevitable that my mind will wander off to the problems our society currently faces and how that could affect him.

But my household is doing its best to stay occupied, and part of that (for me, at least) involves mindless bouts of zoning out. The best way to do that and still be present for my wife is to watch one of her favorite shows with her. We have series that we watch together, and we have ones that we watch separately; regardless, I’m trying to “watch” some of her favorites with her. I’ve dipped my toes into the new Bachelor spinoff, Listen to Your Heart—and of course, there’s the always-present Grey’s Anatomy.

‘Silent All These Years’

This isn’t the first or even the second time I’ve written a column on Grey’s Anatomy. Regardless of how you feel about the show as a whole, you’d be surprised how many criminal defense-related issues the series presents.

It’s been 13 months since the series aired one of its most critically acclaimed episodes, and it’s just my luck that my wife came across it again while streaming. “Silent All These Years” is the 19th episode of the series’ 15th season. The episode has been lauded for its treatment of rape and sexual assault, and from my experience dealing with these types of cases, it seems fairly on point.

“Silent All These Years” deals with a woman who stumbles into the hospital where Grey’s Anatomy is set, obviously in pain and concerned. Through some coaxing and comfort, she ultimately explains that she is the victim of a sexual assault. One of the doctors suggests the woman’s husband be contacted, but she immediately protests, saying he is on a business trip and can’t be bothered. She is visibly distraught at the prospect of reaching out to him.

That reaction immediately made me suspicious about her husband’s role in whatever situation caused her injuries. After an ultrasound reveals her diaphragm has been torn and she will need surgery, my knee-jerk reaction was that her husband must have forced sex on her, harmed her and thus made her fearful of bringing him back into the scenario.

Apparently, that wasn’t the case, though: This poor woman was the victim of a rape at the hands of a stranger. Still, her embarrassment and shame over the incident, even after being injured, seemed true to form when considering the reaction of so many of her real-life counterparts. There are horrible, painful consequences of sexual assault that are unbearable for many victims. As such, some simply refuse to face them.

A significant part of the episode is devoted to the hospital staff and the rape victim’s discussion about, and ultimate acquiescence to, a rape kit. The hope is to try and preserve any forensic evidence prior to the necessary surgery. From my experience, this scene seems relatively accurate as well.

Being subjected to a rape kit collection, as so aptly put by TIME magazine, “is no picnic.” It is a frightful, embarrassing, “invasive two-to-four-hour plus exam.” All the while, the victims have to go through the process, likely reliving the horror they experienced. For those who are sexually assaulted, the pain doesn’t end with the act itself; many times that is just the beginning.

No shelter when ordered to “shelter in place”

I remember when, on the eve of California issuing its “stay at home” order, one of my favorite musical artists (and an excellent Twitter user), Jason Isbell, remarked: “Sitting here thinking of folks who might be stuck in a house that isn’t safe. Maybe if you have a friend who has a potentially aggressive spouse or parent, be as aware as you can right now. Check in.”

That hit me like a ton of bricks. Not because I know individuals in those situations I am worried about, but more so because I’m the one who defends the people those people you worry about are afraid of. I didn’t see dollar signs. I saw the humanity of the situation and the horrible predicament that so many people could potentially find themselves stuck in if and when forced to shelter in place at a place that isn’t a shelter for them at all.

This leads back to my initial reaction regarding the Grey’s Anatomy episode: People forced to stay home in an unsafe environment aren’t merely subject to domestic violence at the hands of their “loved” ones; plenty of people are likely subject to sexual assault and rape as well, and they have no place to hide.

Plenty of news outlets are reporting that overall, there has been a decrease in crime due to the COVID-19 pandemic and the resulting shelter-in-place and lockdown measures ordered by many government officials. I have friends who prosecute cases in smaller, rural areas of Oklahoma who have noted that even the “regulars”—those who are constantly in and out of jail for low-level drug charges and other petty offenses—aren’t even getting caught for new crimes. They’re staying in like so many others.

However, other outlets have reported that domestic violence-related crimes are actually on the rise during the current coronavirus outbreak. The Washington Post has noted that the increase in these types of crimes is not simply limited to the United States; Greenland, Tunisia, France, Brazil and other countries are also seeing spikes in women suffering from domestic abuse.

Critics point out that domestic violence services are flawed because of their shortages and shortcomings to begin with, and that issue is only exacerbated when victims are locked up with their perpetrators. Even though countries such as France and Australia are attempting to allot further funds to aid those in need, it might not be enough.

Sadly, it seems that Isbell’s tweet was correct. Even more unfortunately, it seems there is no easy fix when one’s home isn’t a shelter after all.