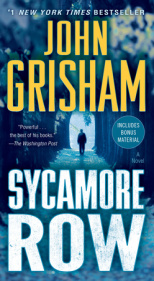 John Grisham is a best-selling author who has seen many of his books become major Hollywood pictures. Jason Bailey is a first-time author who maintains a busy legal practice in western Colorado and only writes during his spare time.

What do these two writers have in common? This year, they are each winners of legal fiction-writing contests sponsored by the ABA Journal.

Grisham’s book, Sycamore Row, won the 2014 Harper Lee Prize for Legal Fiction, which is co-sponsored by the University of Alabama School of Law. Grisham, who won the very first Harper Lee Prize in 2011 for The Confession, was honored in a ceremony held Aug. 28 in Washington, D.C., in conjunction with the Library of Congress National Book Festival. Sycamore Row, which is the sequel to one of Grisham’s best-known books, A Time to Kill, was awarded the prize by a judging panel that consisted of sports columnist Kevin Blackistone; author and screenwriter Fannie Flagg (Fried Green Tomatoes); attorney Dan Kornstein of Kornstein, Veisz, Wexler & Pollard; New York Times U.S. Supreme Court correspondent Adam Liptak; and journalist and author Marianne Szegedy-Maszak.

“My thanks to the committee for the selection of Sycamore Row,” Grisham said in a press release. “I’m still admiring the first Harper Lee award. It’s hard to believe there is now a second one. I am deeply humbled.”

Grisham was a criminal defense and personal injury lawyer in Mississippi for nearly a decade after graduating from University of Mississippi School of Law in 1981. After one day hearing court testimony from a 12-year-old rape victim, he was inspired to start writing what became his first novel, A Time to Kill.

Sycamore Row reintroduces Jake Brigance, the lead character of A Time to Kill and picks up on his life and career after he secured an acquittal of his African-American client for killing his daughter’s rapists, both white men. Sycamore Row, which topped the U.S. best-seller list, examines many of the same themes as A Time to Kill, such as litigation, race relations and the ghosts of Jim Crow. This time, Brigance must defend a wealthy white client’s will that left the bulk of his estate to his African-American housekeeper against contesting claims from his client’s children. The other finalists for the Harper Lee Prize were Once We Were Brothers by Ronald H. Balson and The Burgess Boys by Elizabeth Strout.

First-time author Jason Bailey, a civil and domestic lawyer who currently practices in western Colorado, has been named the winner of the 2014 ABA Journal/Ross Short Fiction Contest. His short story, “Good News Bad News,” was inspired by his experiences as a newly minted attorney working for Legal Aid of the Bluegrass in Kentucky, a Legal Services Corp. entity, from 2005 to 2008. Bailey, who graduated from the University of Kentucky College of Law in 2005, provided free civil, family and housing law representation for poor and indigent clients throughout the state, and a running motif throughout his story was how the protagonist had to drive his old, broken-down car between various counties in Kentucky in order to represent a diverse range of clients that were dire need of legal services.

“It was my experience in Kentucky that the need for legal services far outstrips the ability to provide them, either on a pro bono or small fee basis,” Bailey told the ABA Journal. He says that he would like to see increased funding for the LSC and its entities such as Legal Aid of the Bluegrass. “It’s a great deal for taxpayers,” he says. “[LSC and LSC entities] provide important legal services at an incredibly low rate to taxpayers, but it goes beyond helping poor people. We have to ensure that everyone has access to the justice system.”

Bailey, who stresses that his short story is a work of fiction and not a memoir, did admit to having experienced some of the things that he wrote about. A scene in which the protagonist gets chewed out by a judge was inspired by a real event, and Bailey fondly remembers driving to various counties in northeastern Kentucky in his old, broken-down Honda Accord with windows that would often freeze up and a heater/defroster that no longer worked.

“In the winter, the glass would freeze over, and I’d have to roll down the window and stick my head out just so I could see where I was going,” he says. Bailey, who is currently of counsel at Daniels & Sturges in Grand Junction, Colorado, says he would like to continue writing legal fiction and, like Grisham before him, Bailey believes he can draw inspiration from his legal career. “When you deal with people on a regular basis, you see all kinds of things you couldn’t imagine taking place in real life,” he says. “You come up with every imaginable story that can exist.”