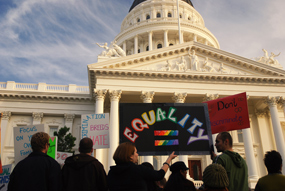 The U.S. Supreme Court has ruled that supporters of a ban on gay marriage in California did not have standing to appeal a ruling adverse to their ideological interests.

The 5-4 decision (PDF) leaves intact a ruling allowing gay marriages in California. It does not affect other states.

The case began with a challenge to a California ballot measure known as Proposition 8 that banned gay marriages in the state. The initiative reversed a California Supreme Court decision finding a state constitutional right for gays to marry. A trial court struck down the referendum, and California officials didn’t appeal. So referendum supporters stepped in to defend the measure.


“We have never before upheld the standing of a private party to defend the constitutionality of a state statute when state officials have chosen not to,” Roberts wrote. “We decline to do so for the first time here.”

Kennedy’s dissent argued that Proposition 8 proponents had the authority to assert the state’s interest in defending the initiative, and standing requirements were met.

“Of course, the court must be cautious before entering a realm of controversy where the legal community and society at large are still formulating ideas and approaches to a most difficult subject,” Kennedy wrote. “But it is shortsighted to misconstrue principles of justiciability to avoid that subject.”

The case is Hollingsworth v. Perry. SCOTUSblog had early coverage of the case.

ABAJournal.com: “Will the Supreme Court ‘stay its hand’ on gay marriage? SCOTUSblog’s Goldstein thinks so”

ABAJournal.com: “Will Justices Opt for ‘Offramps’ in Same-Sex Marriage Cases? Standing Is One of the Issues”