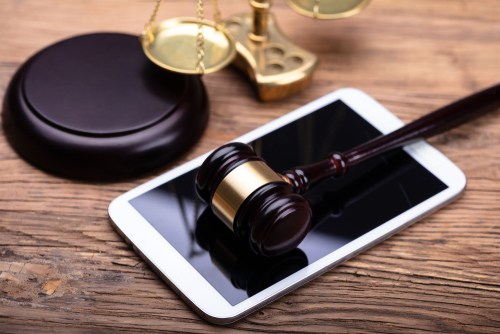 Updated: An immigration lawyer who refused to stop texting in the courtroom lost her appeal Wednesday before the 4th U.S. Circuit Court of Appeals at Richmond, Virginia.

The appeals court upheld the conviction of Charlotte, North Carolina, lawyer Rebecca “Beckie” Moriello for failing to comply with a directive while on federal property and for disrupting the duties of federal employees.

Law360 and Bloomberg Law have coverage of the Nov. 18 opinion.

Moriello had asserted that she had a right to text because of a sign outside the courtroom that allowed lawyers to use electronic devices “for clear and immediate business purposes only.”

The incident occurred in June 2017 after a hearing for her client, according to the 4th Circuit opinion. Moriello obtained permission to observe an asylum hearing that followed her client’s matter, even though asylum hearings are closed to the public.

During the hearing, a protective security officer saw Moriello typing on her phone and asked her to turn off the device. Moriello refused to do so, asserting that it was her right to use the phone for business purposes. Judge Barry Pettinato, the immigration judge, also observed the texting.

Pettinato testified that he had assumed that Moriello wanted to remain in the courtroom, so she could learn something from the hearing.

“The entire time that Ms. Moriello was sitting in my courtroom I did not see her paying attention to what was going on with the attorney or with the witness,” Pettinato said. “She was pretty much nonstop glued to her cellphone and she was texting away, and I found it to be very distracting.”

Pettinato saw that the situation had not been resolved and called a break in the hearing. Police officers were also unsuccessful in getting Moriello to stop and escorted her from the courtroom, according to the opinion. Moriello was ticketed.

Before her conviction, Moriello turned down a plea deal in which she would not admit guilt and would pay a fine as low as $300. At trial, a magistrate judge convicted Moriello and ordered her to pay a fine of $2,500.

Moriello and her lawyer had argued that there was overzealous enforcement, and other lawyers are allowed to use phones and Kindle devices.

She was represented at trial by lawyer Rob Heroy.

“You would be amazed at the resources the government threw at this trial,” Heroy told Indy Week. “There were more government attorneys in the room than they put in there for RICO cases or cartel prosecutions.”

The charges are based on federal regulations governing facilities of the Executive Office of Immigration Review. The regulations require people on federal property to obey signs and directives and to refrain from disrupting government employees in their official duties.

Moriello made several arguments on appeal, including that the two regulations were unconstitutionally vague and that she had not been disruptive.

“Any person of ordinary intelligence would understand that the regulations prohibit the repeated refusal to cease distracting conduct in a courtroom during ongoing immigration proceedings as directed by both the presiding immigration judge and the uniformed bailiff assigned to that courtroom,” the appeals court said.

“It should come as no surprise that immigration judges and courtroom bailiffs have the authority to reasonably control the conduct of persons within their courtrooms,” the 4th Circuit added.

The author of the opinion is Judge Henry Floyd, nominated to the appeals court by President Barack Obama.

Moriello gave this statement to the ABA Journal: “This case is about an attorney following a posted sign, a security guard (not a judge) giving an instruction that contradicted the posted sign, and the attorney standing up for their rights. Defense attorneys are regularly bullied in immigration court, and this is yet another example of it.

“There is more than meets the eye in this case, both for how significant this decision is and what really happened on the day in question. This decision is significant because it gives security guards unchecked power to act against lawyers who quietly observe immigration court hearings. It is about much more than a $2,500 fine and a criminal conviction against one lawyer. This decision makes it seem that I was distracting an asylum hearing, but in fact I was quietly typing on my phone while sitting in the back of a courtroom, something that attorneys do all the time without being accused of distracting others.

“I declined to take the plea deal because it didn’t resolve anything. Immigration defense attorneys often have to spend long periods of time waiting in court for our cases to be called, and we often use our electronic devices to get work done during that time. I didn’t want to risk having to pay $300 every time I had to respond to an email from my office while waiting for my case to be called.”