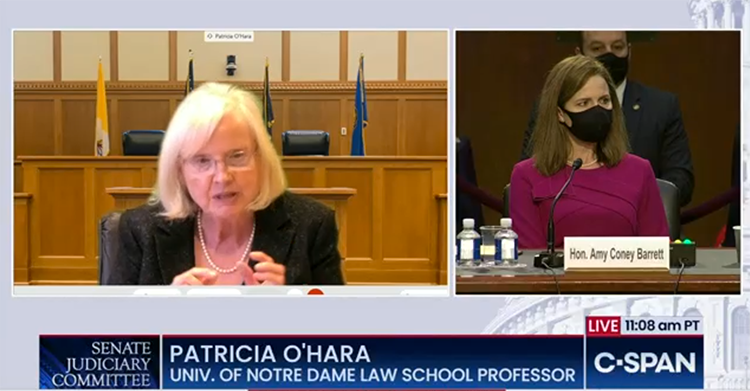 O’Hara “must be in the 3G part of Indiana,” joked Senate Judiciary Committee Chairman Lindsey Graham, as senators waited to hear from her. When Graham was told that O’Hara had to unmute, Graham wondered aloud how she would do that. “Put a quarter in it, I don’t know,” he mused.

The glitch was solved by the time that Barrett concluded her remarks, which mostly tracked prepared remarks that were available before the hearing.

In her remote appearance, O’Hara described Barrett as “brilliant but humble, fair and impartial but empathetic, open-minded and respectful of differences.” Barrett is also a skilled listener who is able to build consensus and is generous to those in need, O’Hara said.

O’Hara was dean of the University of Notre Dame’s law school when she first met Barrett in a bid to recruit her to the law faculty in 2002. O’Hara was aware that many law schools would have an interest in Barrett because of her stellar background. She had graduated first in her Notre Dame law class, she had clerked for Justice Antonin Scalia and U.S. Circuit Judge Laurence Silberman, she had worked at Baker Botts, and she had been an Olin fellow at the George Washington University Law School.

When Barrett agreed to join the Notre Dame law faculty, it was “a big win for us,” O’Hara said. She continued to impress at the law school, and there was no easier task than making her a tenured law professor, according to O’Hara.

Barrett received three distinguished teaching awards from her students. Her teaching evaluations are like reading a thesaurus that contains only superlatives, O’Hara said. Students held Barrett in awe for the power of her intellect, her consummate professionalism and her respectful attitude for differences.

Barrett produced “an incredible portfolio of scholarship,” and when she joined the 7th U.S. Circuit Court of Appeals at Chicago, her opinions had the same characteristics as her academic writing, O’Hara said.

Those characteristics are intellectual rigor, painstaking analysis, clarity of legal reasoning and writing, and a deep commitment to apply the law to the facts of the case before her.

In her remarks to the committee, Barrett said she believed in interpreting the Constitution and laws as written, the same philosophy held by Scalia. Barrett said Scalia’s devotion to his family and beliefs also taught her that a legal career should not be all-consuming.