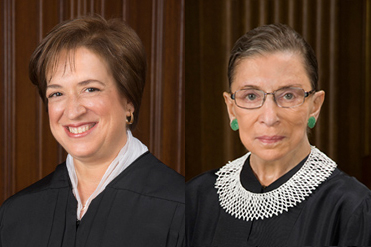 Ginsburg said she thought the electronic age would make it easier for female lawyers with children because you can “have the entire law library at your fingertips wherever you are.” But law firms, she said, are not sufficiently accommodating when it comes to work-life balance, report the National Law Journal and Law360.

“The job of getting rid of the explicit gender barriers has been done,” Ginsburg said. But work-life balance and unconscious bias “remain to be grappled with,” she said.

Ginsburg spoke after receiving the LBJ Liberty & Justice for All Award at the Library of Congress in Washington, D.C.

Speaking at the annual meeting of the New York State Bar Association, Kagan said some Supreme Court processes are stuck in the past, but it still functions well, Law360 reports in a separate story.

Giving one example of the court being stuck “a little bit in a time capsule,” Kagan said people still walk memos between offices.

Kagan also acknowledged that she uses an anonymous name on Twitter so she can see what other people are tweeting.

Kagan's full quote: "I've never had a Facebook account, but I do lurk on Twitter. So I use a different name and I never tweet myself. But, you know it's sort of interesting what you see sometimes."

Via @heyitsmesteve, who was in attendance.