Is 'The Irishman' right about Hoffa? US attorney promises 'more to come' 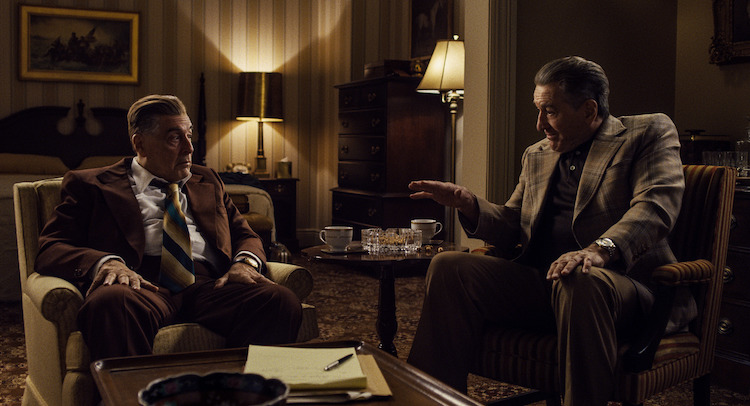 The U.S. attorney for the office that investigated Jimmy Hoffa’s disappearance isn’t relying on the Netflix movie The Irishman for its theories of the case. Nor is a law professor whose stepfather was portrayed as the man who drove Hoffa to his death.

Detroit U.S. Attorney Matthew Schneider told reporters that he has seen the film, and he has a lot of thoughts about it, the Detroit Free Press reports. “I will talk about this but not now,” he told reporters.

“I have my own theories,” Schneider said. “There will be more to come on this.”

Schneider says his office has its own files on the case, which will be 45 years old next summer.

Jack Goldsmith, a professor at Harvard Law School, did his own investigation and published a book, In Hoffa’s Shadow: A Stepfather, a Disappearance in Detroit, and My Search for the Truth, that attempts to show that his stepfather did not drive the car that delivered Hoffa to his killers as portrayed in the film. He wrote about his conclusion in September for NYR Daily.

The Irishman is based on a 2004 book, I Heard You Paint Houses, about Mafia hitman Frank Sheeran, according to the Hollywood Reporter. The writer, Charles Brandt, was a Delaware medical malpractice attorney who helped win early release from prison for Sheeran.

Hoffa, a former Teamsters Union president, disappeared from a suburban Detroit parking lot in 1975 after he had been released from prison. Robert De Niro plays Sheeran in the movie, and Al Pacino plays Jimmy Hoffa.

Goldsmith thinks The Irishman’s theory about who killed Hoffa is wrong, and so is its portrayal of his stepfather, Charles “Chuckie” O’Brien, a Hoffa aide. Goldsmith was 12 years old when Hoffa was killed.

Goldsmith says he had been close to O’Brien, but he cut him out of his life in law school because he feared the impact of the relationship on his career. He reconciled with O’Brien in 2004. O’Brien had insisted that he was innocent, and Goldsmith spent seven years investigating.

Sheeran had told several different tales of Hoffa’s disappearance, according to Goldsmith. At first, he denied any involvement. In 1995, Sheeran said Hoffa was killed by contract killers linked to the White House. In 1996, he said the killers were Vietnamese mercenaries. He told a Hoffa biographer that he helped dispose of Hoffa’s body but did not kill him. Sheeran told Brandt, however, that he was the murderer and allowed a taped confession.

An FBI agent who was the lead investigator on the Hoffa case told Goldmith that the video of Sheeran was laughable and unbelievable. Three other FBI agents who worked on the case told Goldsmith that they knew of no evidence supporting Sheeran’s confession.

FBI agents who worked on the case think the actual hitman was someone from Detroit possibly acting under orders of mobsters who feared that Hoffa might disclose the Mafia takeover of the Teamsters Union pension fund, Goldsmith says. Those agents also think O’Brien was not involved, Goldsmith says.

The Netflix-financed film had a limited run in theaters before Netflix made it available Nov. 27, the New York Times reported.