A Texas judge has been publicly admonished for showing a “deep-seated antagonism” toward a father seeking to retain parental rights to a baby named Luke who was placed in a foster home.

Bailey had characterized the father’s trial testimony as “ridiculous” and “crap” and had warned the father that he could ask prosecutors to prosecute him for perjury.

Bailey told the Denton Record-Chronicle that he has appealed the admonition. He acknowledged making some mistakes but said he didn’t agree with some of the commission’s findings.

The Texas Department of Family and Protective Services had gotten involved with the family after receiving allegations that children belonging to the father’s girlfriend were being exposed to marijuana in the home, and the father had overdosed on Xanax, Nyquil and alcohol.

The girlfriend’s two children were placed in a foster home, and when the girlfriend gave birth to the father’s child, Luke, in June 2016, the baby also was placed in foster care. The father initially participated in recommended services under a service plan for one of the older children but did not complete the plan. Then, in October 2016, the father informed Bailey that he wanted reunification with Luke.

Bailey questioned whether the father could stick with parenting while providing a safe and stable environment. He also said the father had not carried through on a service plan for the mother’s other children. 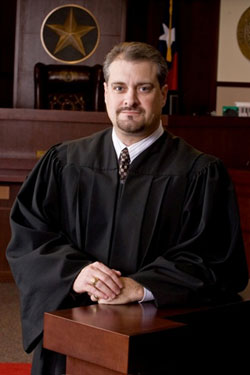 These are some of Bailey’s comments to the father, made in court hearings:

• “Can you point me to one thing you’ve done in your life as an adult, so we are taking about since you turned 18, that would demonstrate, not just words, but demonstrate that you can stick with something to the end, see it through and successfully completed? Because the evidence is that you bounced around from job to job, just don’t generally complete things. You bounce around from house to house.”

• “Be sure about your answers. Don’t sit up there and start lying to me or I’ll call downstairs and have them prosecute you for perjury. You’ve already admitted that under oath, right? So you think I’m stupid and I wasn’t listening?”

Bailey said this after the father testified that he couldn’t have driven drunk and hit a mailbox in December 2016 because he had had stopped drinking before that date.

• “It insults me as a father and as a judge to hear that crap. Because all you care about is you, not that child.”

Bailey said this after the father testified about gifts that he had in case Luke returned home from foster care.

Bailey also made these remarks about the father:

• Bailey questioned whether he should give the father more time to complete recommended services in the case of Luke since he didn’t complete the services for the girlfriend’s other children. “It would be nothing but rewarding him for his indifference, his flippant attitude about bettering himself for the benefit of his children.”

• “I don’t like jerking around with these cases and parents that aren’t gonna do the things that they are ordered to do.”

Bailey terminated the father’s parental rights. He was reversed on appeal, and the case was returned for a new trial in front of a different judge.

Bailey told the Denton Record-Chronicle that this is the first time that he has faced a disciplinary issue. He does not plan to seek reelection but said the admonition didn’t affect that decision. Bailey, a Republican, said he is struggling with the nation’s polarized political discourse, and he doesn’t like judges being elected in partisan elections.

“Extremist” positions on the right and the left “are running the country, and they’re running it into the ground,” he told the Denton Record-Chronicle in a prior article.