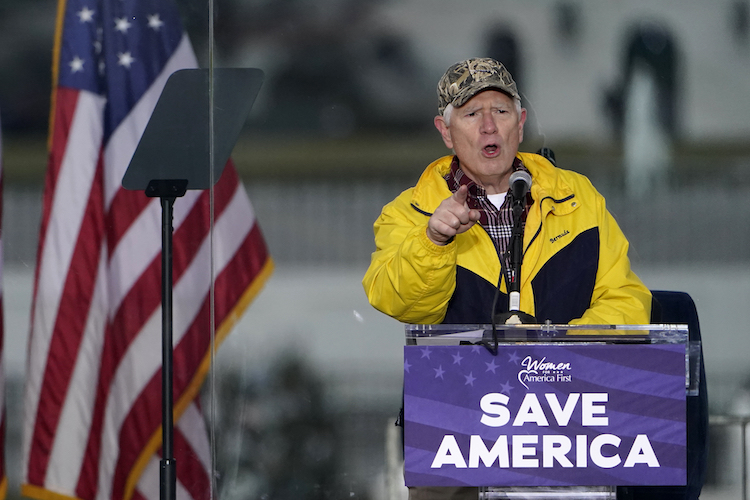 The U.S. Department of Justice is refusing to represent a Republican lawmaker accused in a lawsuit of helping incite the U.S. Capitol riot in a speech that he gave Jan. 6.

The DOJ said it doesn’t have to represent U.S. Rep. Mo Brooks of Alabama under the Westfall Act because his remarks were outside the scope of his duties as a House member.

The Westfall Act provides for the substitution of the United States as a defendant in tort lawsuits against federal employees acting in the scope of their employment. If the federal government declines to step in, an employee can still ask a court for employment certification.

Politico, the New York Times, Law.com and the Washington Post have coverage of the July 27 filing.

During the speech, Brooks told supporters of then-President Donald Trump that the United States was at risk, and they should “start taking down names and kicking ass.”

“Are you willing to do what it takes to fight for America?” he asked.

The DOJ said Brooks’ remarks appeared to be campaign activity, rather than official business. And if Brooks incited violence, the conduct would be outside his duties as a lawmaker, the department’s brief said.

“Inciting or conspiring to foment a violent attack on the United States Congress is not within the scope of employment of a representative—or any federal employee—and thus is not the sort of conduct for which the United States is properly substituted as a defendant under the Westfall Act,” the brief said.

Brooks had sought intervention from the DOJ and the U.S. House of Representatives. The House also declined to act Tuesday.

The DOJ—under Trump and President Joe Biden—took the opposite stance in a lawsuit claiming that Trump defamed writer E. Jean Carroll by denying her accusation of rape. In a June filing, the department said Trump’s comments while president fell within the scope of his employment.

But so far, Trump has not asked the DOJ to defend him in the case filed by Swalwell. He has argued, however, that he is immune from the lawsuit.