Lawyer is thankful for second chances after suspension for erratic behavior, client neglect 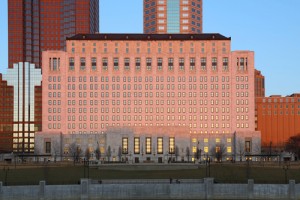 The Supreme Court of Ohio. Image from Shutterstock.com.

Tinch, who practiced law in the Middletown area, has been sober since July 2017 and leads an addiction recovery program at his church, the Hamilton Journal-News reports.

“I am thankful for the grace of God and for second chances,” Tinch told the newspaper. “I’m thankful for the mercy of the court and the Ohio bar. The outcome is what we’ve all been praying for, which is a blessing.”

Tinch was deemed to have committed the ethical violations after he did not respond to an ethics complaint, according to the Ohio Supreme Court opinion that imposed the indefinite suspension. He later testified before a hearing panel.

Tinch’s behavior became “increasingly erratic” in May 2017, the state supreme court said. During one client meeting, Tinch offered his client Xanax, a prescription drug. In another, he asked a client who had been prescribed medication after a car incident to provide him with Percocet or Vicodin pills.

A judge became so concerned about Tinch’s well-being that he would not let him leave the courthouse unless he found a ride home or submitted to a urine test. When sheriff’s deputies escorted Tinch to the probation office, he yelled obscenities. When a deputy handed Tinch an empty specimen cup, Tinch swatted it from the deputy’s hand.

Tinch was charged with two crimes in June and July 2017. In the first, prosecutors alleged that Tinch forged his law firm’s endorsement on a $10,500 personal injury check and misappropriated $312, the firm’s share of the fee. He pleaded guilty to forgery and petty theft, but the charges were held in abeyance pending his completion of a substance abuse program. He completed the program.

In the second, Tinch pleaded guilty to a first-degree misdemeanor count of attempted trespass for breaking into his mother-in-law’s home and leaving a message on her computer.

Tinch can apply for reinstatement in two years if he shows proof that he has paid the $1,000 in restitution, maintained his sobriety, and complied with the terms of his contract with the Ohio Lawyers Assistance Program. He also must submit an opinion from a health care professional or dependency counselor that says he can return to competent and ethical law practice.

Tinch told the Hamilton Journal-News that he hopes that his experiences can be used to help others overcome addiction.