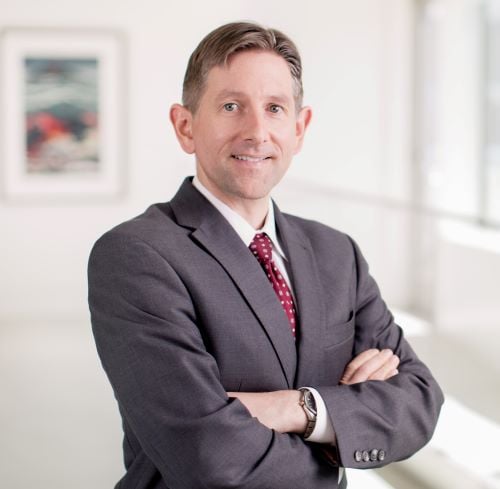 Greg Jacob is back at O'Melveny & Myers as a partner handling Employee Retirement Income Security Act and labor and employment issues after his star turn as the top lawyer for former Vice President Mike Pence.

Jacob advised Pence in a Jan. 5, 2021, memo that he would be breaking the law if he delayed certification of the 2020 presidential election vote count the next day, as proposed by former Chapman University law professor John Eastman, Politico reports.

And as the U.S. Capitol riot got underway, he famously told Eastman, “Thanks to your bulls- - -, we are now under siege,” according to CNN.

Jacob’s first role in government service was as an attorney adviser in the U.S. Department of Justice’s Office of Legal Counsel beginning in September 2001, he told the ABA Journal. He had several positions in the Department of Labor during the George W. Bush administration. He eventually became the solicitor of labor, the top legal role at the agency, Bloomberg Law reports.

Pence’s outgoing top lawyer had recommended Jacob to replace him when Jacob’s application for a career deputy solicitor in the Trump administration’s Department of Labor stalled, according to Bloomberg Law. Jacob began working for Pence eight months before the Jan. 6, 2021, Capitol riot.

He is a University of Chicago Law School graduate and a former clerk for Judge Jacques Wiener on the 5th U.S. Circuit Court of Appeals at New Orleans.

Jacob is “not someone who has ever sought the spotlight,” said Marc Short, Pence’s former chief of staff, in an interview with Bloomberg Law. “Greg is unassuming, incredibly diligent and loathe to shoot from the hip.”

According to Bloomberg Law, friends and colleagues described Jacob as “humble,” “careful,” “under the radar” and “not exactly Mr. Social.” He has written law review articles on constitutional plot lines on the TV shows The West Wing and 24.

Jacob was scheduled to testify before the House committee investigating the Capitol riot later this week.

O’Melveny & Myers’ press release announcing Jacob’s return noted that he had a “highly consequential year” as counsel to Pence.

The Jan. 6, 2021, email exchange began as Eastman pushed Jacob to get Pence to adjourn the electoral count for 10 days to allow state legislatures to investigate the election and consider alternative slates of electors. Jacob was getting a cup of coffee in the Capitol basement with other Pence staffers when they heard shattering glass and the mob entering the building, according to Bloomberg Law.

As the group was escorted to a secure location, Jacob wrote his “furious message” to Eastman, according to Bloomberg Law.

“I share your concerns about what Democrats will do once in power,” Jacob wrote. “I want election integrity fixed. But I have run down every legal trail placed before me to its conclusion, and I respectfully conclude that as a legal framework, it is a results-oriented position that you would never support if attempted by the opposition and essentially entirely made up.”

In a later email, Jacob said Eastman’s advice “has, whether intended to or not, functioned as a serpent in the ear of the president of the United States, the most powerful office in the entire world. And here we are. …

“Respectfully, it was gravely, gravely irresponsible for you to entice the president with an academic theory that had no legal viability, and that you well know we would lose before any judge who heard and decided the case. And if the courts declined to hear it, I suppose it could only be decided in the streets. The knowing amplification of that theory through numerous surrogates, whipping large numbers of people into a frenzy over something with no chance of ever attaining legal force through actual process of law, has led us to where we are.”

In a memo dated the day before the riot, Jacob told Pence that blocking or delaying the count of electoral votes would violate the Electoral Count Act, Politico reports. Eastman’s proposal, as Jacob summarized it, called on Pence to skip reading certifications in any state in which an alternate but uncertified slate of electors had been proposed.

Jacob asserted that Pence would likely lose in court if he accepted Eastman’s proposal. If courts declined to get involved, there would be no neutral arbiter to break the impasse, Jacob said.