"The current Public Service Loan Forgiveness program is a bureaucratic nightmare, and the Department of Education is failing to meet its obligation to help ease the student debt burden for our nation's public servants," Sen. Kirsten Gillibrand, D-N.Y., said Thursday. She and Sen. Tim Kaine, D-Va., introduced the What You Can Do for Your Country Act of 2019 to bolster the program.

Earlier in the day, Kaine spoke to a group of ABA members and staff who had gathered in Washington, D.C., for ABA Day, the association’s main lobbying event. The focus of the 2019 ABA Day was urging lawmakers to adequately fund the Legal Services Corp. and to retain the PSLF, despite the Trump administration’s proposals to do away with both.

Kaine told the attendees at the ABA Day gathering that the bill would “simplify the PSLF process and ensure the administration provides our public servants the forgiveness they deserve,” according to a tweet from the ABA Grassroots Action Center.

Less than 1% of all eligible applicants have received loan forgiveness through the PSLF program, which was established in 2007 to forgive student loans for qualified participants after they work in public service and make payments on their loans for 10 years, said Kaine’s office in a press release.

Millions of borrowers tried to enroll in the PSLF program, the release says, but were told after they made payments that they had the wrong type of loan or repayment plan and would not qualify for forgiveness.

The ABA separately sued the Department of Education in 2016 after its decision to drop some public interest lawyers from the PSLF program. A federal court found in February that when the department changed its interpretation of PSLF regulation, it did not adhere to notice standards mandated under the Administrative Procedure Act, and those changes were arbitrary and capricious. 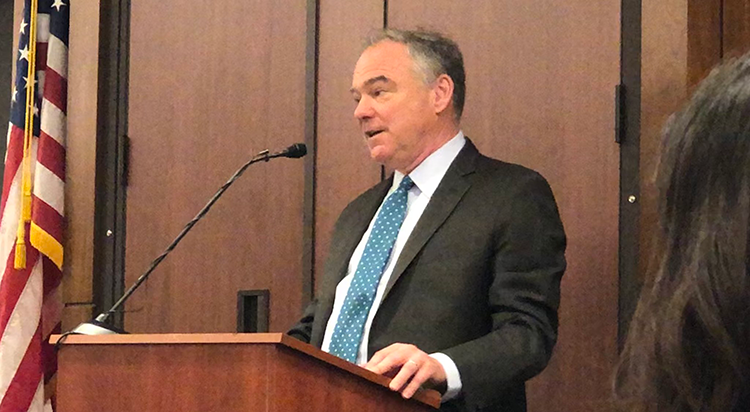 Kaine and Gillibrand’s bill, co-sponsored by 13 other senators, aims to expand eligibility so every type of federal loan is included in the program and ensure that participants can count on repayment when they apply for loan forgiveness. It also would make borrowers enrolled on “extended” or “graduated” repayment plans eligible for the program.

“Firefighters, teachers, service members, and nurses have put in years of service—yet are getting denied the loan forgiveness they’ve earned,” Kaine said in the release. “This bill is an opportunity to ease the burden of debt on our public servants by simplifying the loan forgiveness program.”

Additionally, PSLF participants could ask that half of their loans be forgiven at five years, with their remaining loans forgiven at the end of 10 years, under the bill.