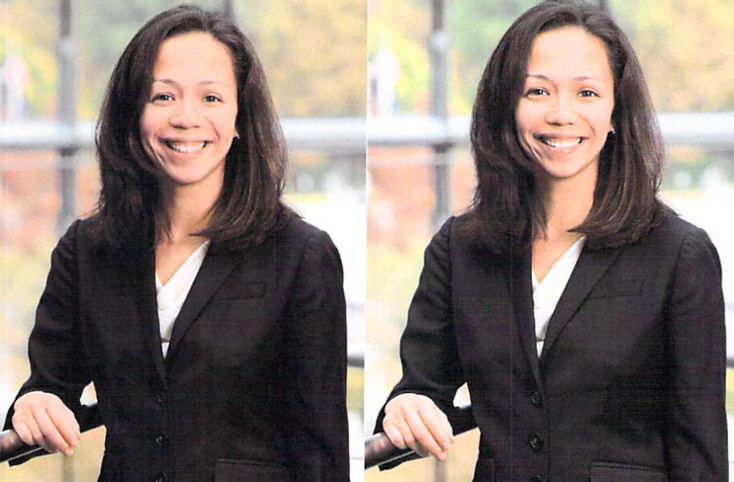 The photo on the left of Julia Sheketoff is the original version, and the one on the right is the “doctored” version. Images courtesy of the Aug. 13 lawsuit.

A new lawsuit accuses Jones Day of reinforcing “archaic gender roles” in an unequal parental leave policy and using a secret compensation system that is “tailor-made to enable sex discrimination.”

The plaintiffs, Mark Savignac and Julia Sheketoff, are married to each other and are former law clerks for U.S. Supreme Court Justice Stephen G. Breyer. They were both associates at Jones Day. Bloomberg Law, the New York Times, the American Lawyer and Law360 have coverage.

The parental leave policy offers 18 weeks of paid leave to biological mothers who are primary caregivers but only 10 weeks to biological fathers in the same situation, according to the lawsuit filed on Tuesday. The firm offers an additional six weeks of unpaid leave to primary caregivers of either sex, upon request, but the firm looks more favorably on requests by females, according to the suit.

The extra eight weeks for mothers are labeled disability leave, but the reality is that all biological mothers are given the extra paid time off, the suit says.

The suit highlights the law firm’s alleged unequal parental leave with this alleged comment by a partner: What would a man do on parental leave—watch his wife unload the dishwasher?

The two lawyers say they complained about the Jones Day policies in a January 2019 email shortly after Sheketoff left the firm to become an appellate public defender. Savignac was fired three business days later. Male partners who would have given him good references were banned from doing so, the suit alleges.

Sheketoff also says she received a reduced raise after her third annual review because of an evaluation from a male partner for failing to show him the degree of deference that he demands from female, but not male, attorneys.

Sheketoff says she encountered sexism soon after she joined Jones Day in October 2014 when the law firm altered her bio photo. The law firm edited the photo to lighten the skin of Sheketoff, who is biracial, and to narrow her nose, according to the suit. “The apparent purpose of the alteration was to make Julia appear more Caucasian and (in the opinion of the editor) more attractive,” the suit says.

Sheketoff’s negative review followed a scolding from a partner for raising questions about his edits to a memorandum she wrote that made the document misleading or unclear, she says in the suit. When she discussed the edits, he sent an email scolding her for second-guessing him.

When Savignac was assigned to work on a brief for the partner, however, the partner had deferred to Savignac on both substance and style, the suit says.

In their January email to the firm, Sheketoff and Savignac said the law firm’s family leave policy is illegal under Title VII. The email asks the law firm to give Savignac 18 weeks of paid parental leave and six weeks of unpaid leave “or else I will file a charge with EEOC and then a class-action lawsuit, and the matter will be decided in the D.C. Circuit and in the court of public opinion.”

According to the New York Times, a parental leave policy like Jones Day’s does not appear to have been tested in court. If the extra time was intended for bonding, it should be equal for fathers and mothers, said Cynthia Thomas Calvert, who advises employers on leave policies. If it is meant to accommodate recovering mothers, the time off would not have to be equal.

Jones Day defended its parental leave policy in a statement that said birth mothers are eligible to receive the extra eight weeks of paid leave under the firm’s short-term disability policy.

“Ignoring both the law and biology,” the statement said, “Mr. Savignac and Ms. Sheketoff complain that this generous family leave policy, which is fully consistent with guidance of the Equal Employment Opportunity Commission, perpetuates gender stereotypes because the firm does not require birth mothers to submit medical evidence proving that childbirth has had a physical impact on them sufficient to justify disability leave. Neither the law nor common sense requires such intrusive disclosures.”

When the couple first raised questions about the family leave policy in August 2018, the firm responded to their questions and no adverse action was taken. Savignac was fired after sending the “intemperate email” that demonstrates “open hostility to the firm,” the Jones Day statement reads.

The firm had concluded that Savignac “showed poor judgment, a lack of courtesy to his colleagues, personal immaturity, and a disinterest in pursuing his career at Jones Day.”

The firm also says it did not doctor Sheketoff’s photo, which she personally selected for the website.