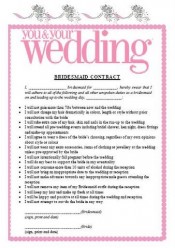 One in five women who participated in a recent magazine survey said she would like to require her bridesmaids to sign the wedding-day equivalent of a prenuptial agreement, reports the Daily Mail.

Asked what provisions they would like to see the contract contain, many respondents cited pregnancy, weight gain or even a change in hairstyle, as grounds for firing a bridesmaid, the United Kingdom newspaper reports.

The survey was conducted by You & Your Wedding magazine, and involved more than 1,000 participants. Although there is no evidence that such bridesmaid contracts are being used by actual brides, a magazine editor predicts they soon may be.