Air travelers should have a private right of action if discriminated against, ABA House says 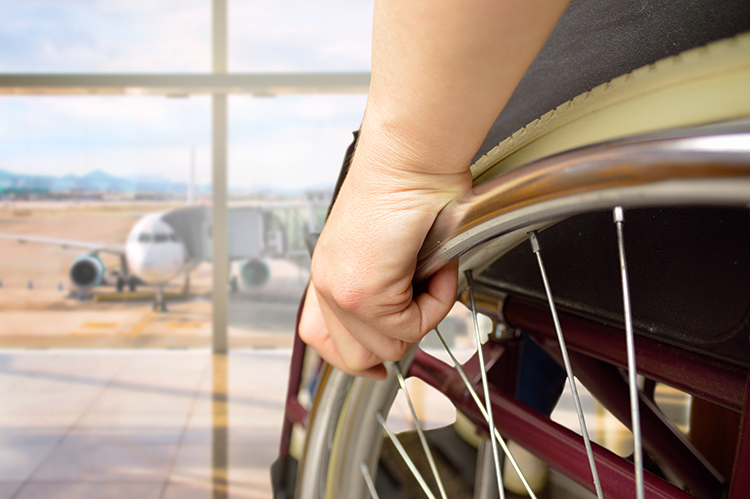 The ABA House of Delegates approved a resolution targeting air carriers’ discrimination against people with disabilities after lengthy debate Monday at the midyear meeting in Austin, Texas.

Resolution 106 urges Congress to amend the Air Carrier Access Act to establish a private right of action for those who are not granted equal access to commercial air travel.

The Commission on Disability Rights, the sponsor of the resolution, also asks that the law provide equitable and legal relief, including compensatory and punitive damages, reasonable attorney fees, reasonable expert fees and costs of the action to prevailing plaintiffs.

Congress passed the Air Carrier Access Act in 1986 to prohibit discrimination on the basis of disabilities. Although the law improved commercial air travel for people with disabilities, they continue to encounter substantial barriers, including damaged assistive devices, inaccessible aircraft and lavatories, and delayed assistance, according to the report accompanying the resolution.

Since 2001, when the U.S. Supreme Court held in Alexander v. Sandoval that there is no private right of action to enforce disparate-impact regulations under Title VI of the Civil Rights Act of 1964, several federal courts have ruled that Congress provided administrative methods of enforcing the Air Carrier Access Act in lieu of creating a private right of action.

Denise Avant, the chair of the ABA Commission on Disability Rights and author of the report, introduced the resolution to the House. She pointed out that air travel is essential to the global economy, and people must travel around the world to visit family and friends, for jobs, and for meetings like the ABA Midyear Meeting.

“Imagine if you have to turn down a job offer because you did not have access to the lavatories during a 23-hour flight overseas,” Avant said. “Imagine if you missed the taking of an important deposition because you could not fly with your service dog, even though you submitted the right documentation in a timely manner.

“If any of these things happened today, the only remedy, if any, is payable to the government and not to you, the aggrieved party.”

According to data from the Department of Transportation cited in the report, 34,701 disability-related travel complaints were filed with 35 domestic air carriers and 155 foreign air carriers in 2017.

Since the Department of Transportation typically pursues an enforcement action against an air carrier only after it receives numerous complaints and determines a pattern of discrimination, the specific person whose rights were violated receives no compensation.

Marc Warren, the chair-elect of the Forum on Air and Space Law and a partner in the Washington, D.C., office of Jenner & Block, spoke in opposition to the resolution. He argued that enacting a private right of action would bypass the existing administrative law scheme under the Department of Transportation and move the adjudication of most disability-related claims under the Air Carrier Access Act to the courts.

He said this would result in “unpredictable and nonuniform outcomes” and may call for adjustments in the redesign of aircraft or their lavatories, seats or bulkheads.

“Some of these adjustments may be warranted but not by the courts,” Warren said. “I submit that judges are not well suited to redesign airplanes.”

Immediate-past ABA President Bob Carlson spoke in favor of the resolution, contending that because there is legislation pending in Congress that addresses this issue, it is critical to the process that the ABA be involved.

Mark Alcott, a member of the Board of Governors from New York, made a motion to amend the portion of Resolution 106 that made reference to attorney fees, reasonable expert fees and the costs of the action. He said that while those who suffer discrimination on an airplane or anywhere else should have a private right of action, the resolution was too broad.

“It’s beyond the scope of what we usually extend to claimants, and it’s inconsistent with the American rule, which is our standard practice in litigation,” he said.

Scott LaBarre, a longtime disability rights attorney and a delegate from the Denver Bar Association, opposed the amendment, saying it is common in these types of civil rights statutes to have an exception to the American rule, particularly with respect to attorney fees.

“The main reason this is so is because those who are bringing these cases are among the poorest in our nation,” he said. “Of the several hundred clients I have represented over the years, maybe one or two could have afforded my hourly rates.”

Marc Maurer, a member of the Commission on Disability Rights from Baltimore, also spoke in opposition to the amendment. He agreed that if attorney fees aren’t included in the law, it is not likely people with disabilities will be able to enforce their civil rights in court.

“It’s too costly, and the compensation is tiny in comparison to cost of pursing litigation,” he said.

After the motion to amend was defeated, the resolution was adopted.

With the House of Delegates’ approval of the resolution, the ABA can move forward with encouraging passage of proposed legislation, including the Air Carrier Access Amendments Act of 2019.