Toronto Star reporter Daniel Dale is vowing to follow through on his threat to sue Mayor Rob Ford for suggesting in a television interview that Dale is a pedophile.

Dale said Tuesday that he would proceed with a defamation suit against Ford after rejecting the mayor’s attempt at an apology, Fox News reports.

“In his apology, the mayor didn’t retract anything at all. Instead, he blamed the media for its reasonable interpretation of his words,” Dale said in a tweet. “And, crucially, he didn’t retract or specifically apologize for the categorically false, malicious, and in-itself-defamatory claim about me taking pictures of his young kids,” he said in this tweet and this tweet. 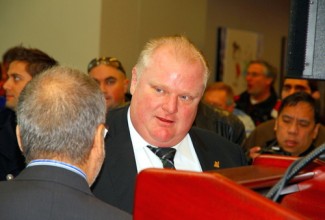 The dispute stems from an encounter between the mayor and the reporter outside of Ford’s home in May 2012. Dale said he was there to look at a plot of public land next door to the mayor’s home that Ford wanted to buy when Ford emerged from the home to confront him.

Ford accused the reporter of taking pictures of his small children. Dale said he hadn’t taken any pictures and that the mayor’s children were nowhere in sight.

Dale served Ford with a libel notice last week and demanded an apology.

The mayor tried to explain himself during a city council meeting Tuesday. He said he didn’t mean to insinuate that Dale was a pedophile. “I was merely commenting on the thoughts that went through my mind on the night,” he said.

But Dale said later that he wasn’t satisfied with Ford’s explanation.

“So, while I appreciate the mayor’s first step, no dad or teacher would accept that apology as sufficient,” he said. “I would appreciate another try.”

Previous:
What's the future of Google Glass for law firms? Or a good app for handwritten notes on an iPad?