Trump Organization found guilty of tax fraud; maximum penalty is no more than 'a rounding error' 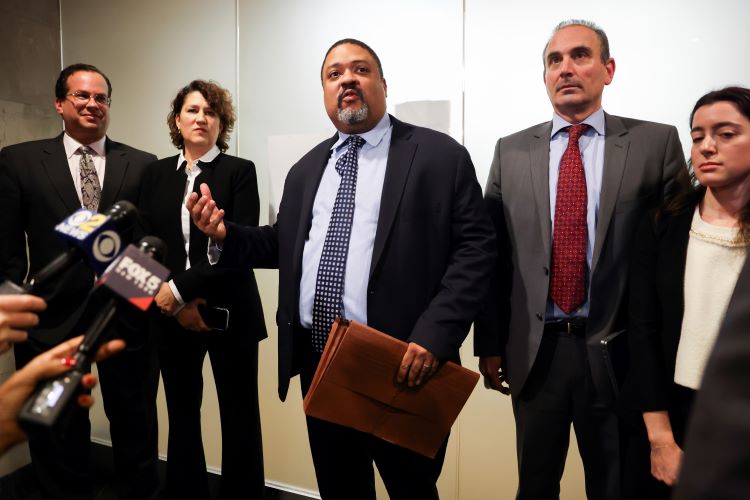 Manhattan District Attorney Alvin Bragg, center, surrounded by his legal team, speaks to the media after the jury found the Trump Organization guilty on all counts in a criminal tax fraud case Dec. 6 in New York. Photo by Julia Nikhinson/The Associated Press.

Jurors in Manhattan, New York City, convicted the Trump Organization of tax fraud Tuesday following a trial that focused on lavish corporate perks to executives that weren’t reported as income.

The potential fine is $1.62 million, which the New York Times characterized as “a rounding error” for former President Donald Trump.

But the conviction on all 17 counts “could now reverberate through the 2024 presidential race, providing early fodder for opponents and their attack ads,” the New York Times reports.

Prosecutors didn’t charge Trump, but “they invoked his name throughout the monthlong trial, telling jurors that he personally paid for some of the perks and even approved a crucial aspect of the scheme,” according to the New York Times.

Trump has denied knowledge of the scheme, according to the Washington Post.

Other publications with coverage of the conviction obtained by the Manhattan district attorney’s office include Reuters, CNN and Politico.

The New York attorney general’s office, meanwhile, has filed a civil suit alleging that Trump and other senior executives falsely inflated his net worth to induce banks to lend money to his company on favorable terms. The suit seeks disgorgement of financial benefits obtained as a result of the scheme, estimated at $250 million.

Two Trump Organization companies were convicted in the criminal trial: the Trump Corp. and the Trump Payroll Corp.

The Trump Organization’s chief financial officer, Allen Weisselberg, had previously pleaded guilty to 15 felonies for failing to report $1.76 million in income. He was the “star witness” for the prosecution, according to the New York Times.

Prosecutors had to show that Weisselberg was a “high managerial agent” who acted within the scope of his employment to prove the case against the company, according to CNN. Weisselberg testified that his scheme was primarily due to his “greed,” but it also benefited the company because it paid less in payroll taxes.

The judge in the case, Judge Juan M. Merchan, had once worked as an internal auditor at a small real estate development company, making him “unusually equipped” to deal with financial details presented at trial, according to the New York Times.