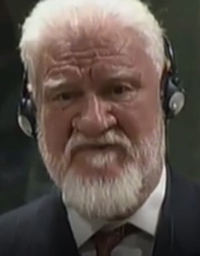 A convicted war criminal died at a hospital Wednesday after drinking from a vial he claimed to contain poison at a United Nations tribunal in The Hague.

Slobodan Praljak, a former Bosnian Croat general, drank the liquid after the International Criminal Tribunal for the former Yugoslavia upheld his 20-year sentence, report the New York Times, the Guardian, CNN, the BBC and NPR.

“I just drank poison,” the 72-year-old said. “I am not a war criminal. I oppose this conviction.”

Courtroom proceedings at The Hague are “typically tightly controlled,” the Times says. If tests confirm the liquid was poison, officials will likely face questions about how Praljak managed to smuggle it into the courtroom.

The judges were ruling in the appeals of six former Bosnian Croat political and military leaders accused in a campaign against Bosnian Muslims during the breakup of Yugoslavia. The tribunal found that Praljak failed to act to stop a Muslim roundup and planned murders, according to the BBC.