Where in the world is John Pierce? Lawyer for Jan. 6 Capitol riot defendants goes missing 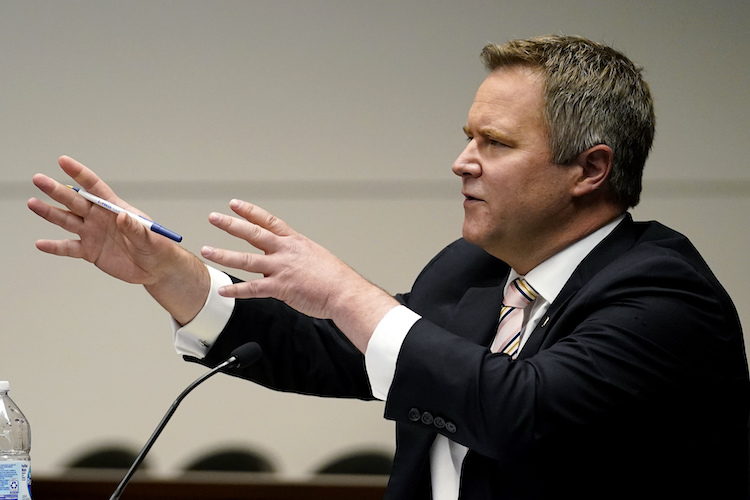 A lawyer representing 17 defendants charged in connection with the Jan. 6 riot at the U.S. Capitol has made no contact with federal prosecutors since Aug. 23, and there has been conflicting information about his health, according to recent court filings from the acting U.S. attorney for the District of Columbia.

John Pierce, a partner with Pierce Bainbridge, did not respond to an ABA Journal interview request. According to the government’s Aug. 30 pleading involving defendant Peter Schwartz, the 17 defendants appear to be effectively without counsel. A similar pleading was entered in the case of Casey Cusick, another defendant represented by Pierce.

Pierce did sign a Sept. 1 motion for defendant Christopher Worrell seeking to revoke detention because of Worrell having lymphoma and a broken hand.

At a Thursday hearing, Ryan Marshall, who works for Pierce but reportedly is not a lawyer, told the court that he was trying to contract a licensed attorney outside Pierce Bainbridge to represent Schwartz, Law.com reports.

The court appointed a public defender to meet with Schwartz to determine whether he wants to stay with Pierce, hire a different lawyer or try to get public defender representation, according to Law.com. Also on Thursday, the court in an order approved a request by Deborah Lee, another client, to strike Pierce’s representation and replace him with Cara Kurtz Halverson, an assistant federal public defender.

Later in the day, at a different hearing, Marshall showed up with someone he said was a licensed attorney, who would be helping in Pierce’s absence, the Associated Press reports. The article does not list that attorney’s name.

A California attorney who is known for his work as a civil litigator, Pierce represents more defendants connected to the Capitol riot than any other lawyer, the New York Times reports.

Patrick Leduc, a Florida lawyer who represented another defendant from the Capitol riot, says he doesn’t know what Pierce charged for the work, but he’s heard of some attorneys requiring retainers of at least $100,000.

“We live in such a cynical country, where no one wants to give anyone any forgiveness or grace. I fear that for the 17 defendants who have been victimized by this person, people will say ‘Serves them right.’ No, it doesn’t. It’s not like a bunch of lawyers are going to step up and do this pro bono; I just don’t see that happening,” Leduc adds.

Pierce created a group, the National Constitutional Law Union, which is described on its website as a nonprofit social welfare organization calling on “freedom-loving Americans” to unite and stand up for their rights.

Marshall, Pierce’s employee who has been making court appearances, is the group’s chief financial officer and director of diversity and inclusion. But Marshall is not a licensed attorney, and he faces felony criminal charges in Pennsylvania, according to the government pleadings.

The Pittsburgh Tribune-Review reported in August 2020 that Marshall, then a courthouse law clerk, was charged with conspiracy, theft and tampering with public records based on allegations he and other court staff defrauded an elderly woman after her husband died.

At hearings for the Capitol riot defendants, Marshall provided the court with various explanations about why Pierce was not there, according to the federal pleadings. Those reasons included a conflict, a car crash and being hospitalized with COVID-19. Also, Marshall reportedly told the court that Pierce was on a ventilator and was nonresponsive during his hospitalization.

Additionally, the pleadings claim that Marshall told an assistant U.S. attorney that he did not have direct knowledge that Pierce was sick with COVID-19 and had received conflicting information from Pierce’s friends.

Womack described Pierce in the tweet as a “former Army tank platoon leader” and a “natural-born fighter” who thought he might have COVID-19 but was actually suffering from dehydration and exhaustion “in relation to his tireless work on behalf of his clients.” That included the 17 defendants charged in connection with the Capitol riot, according to the statement.

There’s a “zero” chance that missing hearings and sending a nonlawyer in your place could be part of any sort of defense strategy, says Leduc, a colonel and staff judge advocate in the U.S. Army Reserve who was deployed to Qatar on July 20—the day after his client was sentenced.

In its pleadings, the government also notes that Pierce, a frequent Twitter user with the handle @CaliKidJMP, had not posted any tweets since Aug 20. The last one features a video of Pierce speaking to the Redlands Tea Party Patriots while wearing a button-down shirt, blue jeans and open-toed sandals.

Pierce also used to represent Kyle Rittenhouse but was fired from the case, the Milwaukee Journal Sentinel reports.

Rittenhouse was charged with homicide after shooting three men, killing two, at a 2020 Kenosha, Wisconsin, demonstration—days after police shot Jacob Blake, a Black man, in the same town. Some questioned Pierce’s role in the #FightBack Foundation, a group that sought donations for Rittenhouse’s legal defense, and Pierce is no longer involved in the organization, according to the Milwaukee Journal Sentinel.

Another issue for Pierce is that various businesses claim that his law firm defaulted on millions of dollars in loan agreements. That includes investment banking services business Katz, Kane & Co., which filed a New York state court petition in December 2020 to confirm a $2.8 million arbitration award entered against the law firm. Based on court records, it appears that the judgment has not been satisfied.

Virage SPV, a litigation funder, filed a notice to intervene in the Katz, Kane & Co. filing. Pierce’s law firm owes Virage SPV “not less than $59 million,” according to that motion, which argued that it had a first-priority interest against all Pierce Bainbridge’s assets. The court rejected Virage SPV’s argument in April.