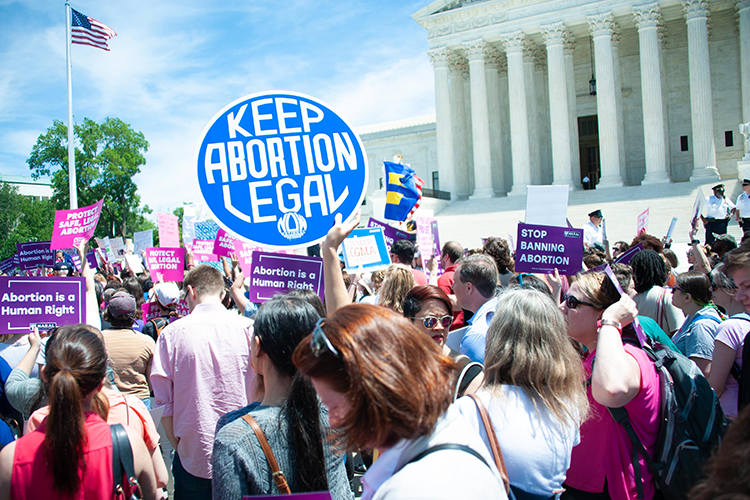 Abortion rights supporters rally in front of the Supreme Court in Washington, D.C., in May 2019. Rena Schild / Shutterstock.com.

Abortion restrictions should be evaluated under a new approach as a result of a June opinion by U.S. Supreme Court Chief Justice John G. Roberts Jr., a federal appeals court said Friday.

The 8th U.S. Circuit Court of Appeals at St. Louis said Roberts rejected a balancing test to evaluate abortion restrictions when he supplied the fifth vote to strike down a Louisiana abortion law.

Citing the new approach, the 8th Circuit lifted an injunction that had prevented Arkansas abortion restrictions from taking effect and remanded the case for reconsideration in light of Roberts’ opinion.

The National Law Journal, Law360 and the Arkansas Democrat-Gazette have coverage of the 8th Circuit’s Aug. 7 opinion in Hopkins v. Jegley, while How Appealing links to additional coverage.

The Arkansas Democrat-Gazette reports that four laws are being challenged in the Arkansas case. One bans a common second-trimester abortion procedure known as dilation and evacuation. Another requires abortion providers to notify law enforcement when anyone age 16 or younger obtains an abortion. A third law requires abortion providers to review medical records to ensure that a woman is not using abortion as a method for sex selection. A fourth law requires women seeking abortions to notify their partner or family regarding disposal of fetal remains.

Roberts supplied the critical fifth vote in June Medical Services v. Russo when the U.S. Supreme struck down a Louisiana law that requires doctors at abortion clinics to have admitting privileges at nearby hospitals. The law is nearly identical to a Texas law struck down by the Supreme Court in 2016 in Whole Woman’s Health v. Hellerstedt.

Many had heralded the Supreme Court’s June decision in June Medical Services because it struck down the Louisiana law. But some had warned that Roberts’ opinion would curtail the right to abortion.

Roberts said the Louisiana law should be struck down because of precedent, but it should be evaluated under an “undue burden” standard, rather than a cost-benefit balancing test used in Whole Woman’s Health. Roberts got four more votes to reject the balancing test from the court’s conservatives, Justice Brett M. Kavanaugh pointed out in a dissent in June Medical Services.

According to a Slate article, the 8th Circuit decision “confirms that Chief Justice John Roberts’ controlling opinion in June Medical will serve as a tool to eviscerate abortion rights. Those who briefly heralded him as a champion of reproductive freedom were too caught up in the halftime show to see the game.”