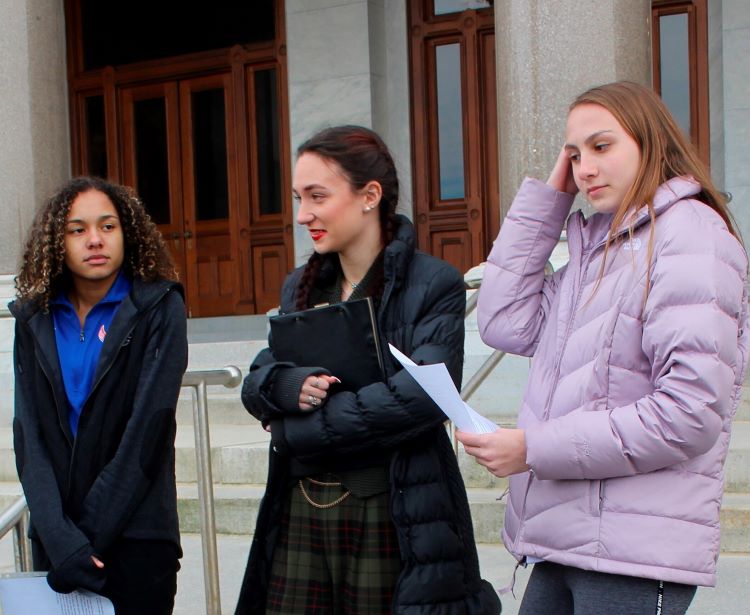 Alanna Smith (from left), Selina Soule and Chelsea Mitchell prepare to speak at a news conference in February 2020 outside the Connecticut State Capitol. They are three of four cisgender athletes who alleged that a transgender-inclusive sports policy deprived them of a fair shot at statewide track titles in high school. Photo by Pat Eaton-Robb/The Associated Press.

Standing issues and a lack of notice have doomed a challenge to a transgender-inclusive sports policy.

The 2nd U.S. Circuit Court of Appeals at New York ruled Friday against four cisgender athletes in Connecticut who alleged that the policy deprived them of a fair shot at statewide track titles in high school. They alleged a violation of Title IX of the Education Amendments of 1972, which bans discrimination “on the basis of sex” in education programs that receive federal funding.

The 2nd Circuit affirmed the dismissal of the suit.

The appeals court also said the plaintiffs couldn’t sue for damages because the Connecticut Interscholastic Athletic Conference and its member schools didn’t have adequate notice that the policy could violate Title IX.

“Indeed, they had notice to the contrary,” the appeals court said.

The student plaintiffs asserted that they had standing because the policy deprived them of the chance to be champions, and current records perpetuate the past injury. But the students were “indeed ‘champions’” because they placed first in various events, sometimes while competing against the two transgender students, the appeals court said.

The 2nd Circuit also noted that all the plaintiffs have graduated from high school and are competing on collegiate track-and-field teams, so changing their records would not improve their college recruitment opportunities.

The plaintiffs had also alleged that their track records could affect future employment opportunities. But the impact is speculative and doesn’t support standing, the appeals court said.

“To be clear,” the appeals court said, “we do not decide now whether a court can ever award an injunction to rewrite records.” But standing requirements must be satisfied, and it didn’t happen in the instant case.

Turning to a request for damages, the appeals court said the Department of Education’s Office of Civil Rights’ position on transgender athletes “has fluctuated with the changes in presidential administrations in 2016 and 2020.” But the office has never clearly provided that Title IX is violated by allowing transgender students to participate on athletic teams consistent with their gender identity, the appeals court said.

In addition, other federal appeals courts have held that Title IX does not bar schools from treating transgender students consistent with their gender identity. Some federal appeals courts have gone further and held that Title IX is violated by treating transgender students according to their sex assigned at birth.

“Although these cases from our sister circuits do not address the exact issue of participation of transgender athletes on gender specific sports teams,” the 2nd Circuit said, “such authority nonetheless establishes that discrimination based on transgender status is generally prohibited under federal law and further supports the conclusion that the CIAC and its member schools lacked clear notice that the policy violates Title IX.”

The students were represented by Alliance Defending Freedom, a conservative legal advocacy group, while the American Civil Liberties Union represented two transgender students who intervened in the litigation, according to press releases here and here.

Christiana Kiefer, senior counsel for Alliance Defending Freedom , said in a statement it is “evaluating all legal options, including appeal.”

The case is Soule v. Connecticut Association of Schools.

Judge Denny Chin wrote the decision, joined by Judge Susan Carney and Judge Beth Robinson. All three judges are appointees of Democratic presidents, including Robinson, who is an appointee of President Joe Biden.

How Appealing links to the decision and articles that covered it.