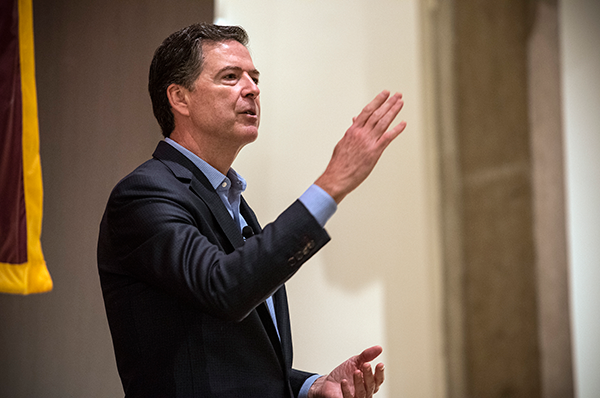 Former FBI Director James Comey addresses a crowd at the University of Chicago on Oct. 29. Photos by Lloyd DeGrane.

It was never one of former FBI Director James Comey’s career goals to be an “unemployed B-list celebrity,” he said, addressing one elephant in the auditorium at the University of Chicago Law School on Tuesday.

He also told students and faculty who gathered for the annual Ulysses and Marguerite Schwartz Memorial Lecture that when people recognize him in the grocery store or mall, they almost always ask about his height.

“Because it may distract you, I’m 6 feet, 8 inches tall, it’s a freak show,” Comey said, drawing one of many laughs from the audience.

With those two points out of the way, Comey turned to the topic of his lecture, “Leading Legally: The Challenges and Opportunities of Lawyers in Leadership Roles.” He said it became his mission to communicate what being an ethical leader means after he was fired by President Donald Trump in May 2017.

“I especially want to tell that to young people and come to my proposition—I believe that lawyers and especially graduates of this law school are uniquely suited to be ethical leaders,” said Comey, who graduated from the University of Chicago Law School in 1985.

He later was the U.S. attorney for the U.S. District Court for the Southern District of New York, U.S. deputy attorney general and senior vice president and general counsel at the Lockheed Martin Corp. before being sworn in as director of the FBI in 2013. 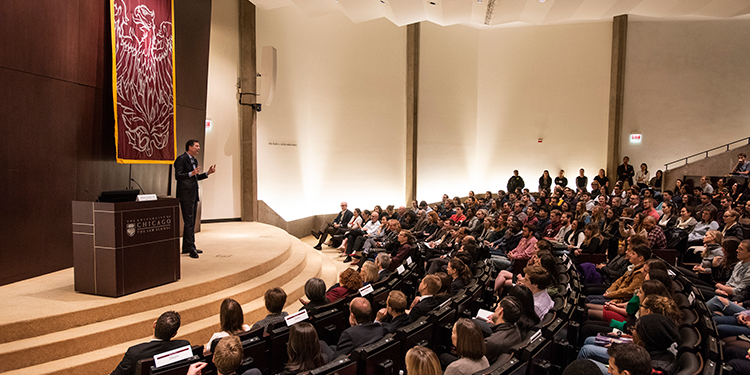 Comey explained that a leader isn’t just a manager but someone who can also connect people and help them see the meaning in their work. In his experience, he said, the best parents, teachers, coaches and bosses have four attributes: They are both kind yet tough and confident yet humble.

He approached the potential dichotomy between the first pair by telling the audience that one of his weaknesses is having the “ability to convince myself that what I’ve done is awesome.” However, he said, he has been surrounded by people who loved him enough to say, “No, that’s crap—you can be better than that, you can be so much more.”

Comey translated that into his leadership at the FBI by getting his own lunch in the cafeteria each day, without his jacket and his security detail. He said he never cut in line and spent the time talking to employees and asking them about their experiences with the agency.

“I was trying to send a signal that I’m with you, I’m part of you, I’m not better than you,” he said. “Kind and tough, trying to build an environment where people know the standards are high but also know that they are loved.”

When leaders display the second pair of attributes—confident yet humble—they take pride in the achievements of their people, Comey told the audience. He has experienced this not only in professional settings but also as the father of five children at sporting events.

“I had never seen the dysfunction of people competing with their own children, people almost begrudging their children,” he said. “I think we’re supposed to take joy in and hope they are better than us in everything.

“That takes a sense of confidence that allows you to be humble.” 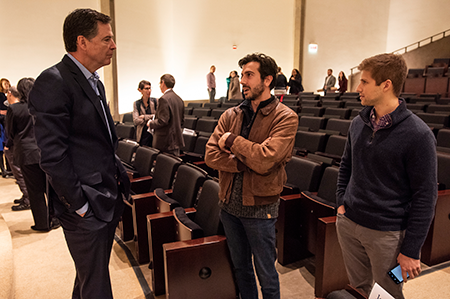 Comey added that leaders with these two attributes also listen to the people around them, recognize what they’re saying, and offer them a safe environment to share their thoughts. He said President Barack Obama was the most effective listener he encountered in a leadership role.

He said Obama rarely sat behind his desk, faced him, nodded, and made affirming sounds while he spoke.

“He knew if he interrupted, I may stop talking,” Comey said. “Then when you were done, he would ask you questions from minute one, minute seven and minute nine.”

Comey reminded the audience that his proposition involved ethical leadership, which he characterized as the way that a leader arrives at solutions. He said ethical leaders “lift their eyes” beyond the urgent and short-term situation, ask for help, and travel to the future to determine how they would explain their decision to a classroom or their children a decade from now.

“Why do I think lawyers are uniquely suited to be ethical leaders?” Comey said. “Think about what you have been doing here. You have been practicing those three things.”

Comey closed his lecture by saying the nation’s leaders must understand that the rule of law remains at the center of its culture. He encouraged the audience to use what they learn in law school to aspire to finding the truth and participating in the leadership of institutions and the country.

“My hope for all of you is that you take this amazing education you are getting here, realize the value of it, and use it to participate in the life of institutions of all kinds,” he said. “We will be OK, so long as quality people decide to engage and bring with them what they can.”

Previous:
No-deal Brexit could have drastic consequences for criminal justice

Next:
For 30 years, ProBAR has served immigrants and refugees at the southern border