Darryl Wilson sees cooking as a type of therapy. “We work in one of the most stressful professions that there is out there, and we always have to find things that make us happy and that are fulfilling or rewarding to us.” Photo by Haynes Photography.

As a kid growing up near Jackson, Mississippi, Darryl Wilson spent countless hours after school and during the summer with his grandmother in her kitchen.

He remembered those lessons in high school, after his parents got a divorce and his mother needed him to help around the house while she was at work. He began cooking to feed himself but also realized he found comfort in experimenting with different flavors and figuring out what ingredients worked well together.

“That’s how I got into cooking; [it was] really for survival, but then survival turned into a mental health outlet for me,” says Wilson, who manages global commercial litigation for Tyson Foods.

Wilson turned to cooking during difficult times, and after the start of the COVID-19 pandemic in 2020, he looked for more opportunities to develop new recipes and test them out on his close friends. He gravitated toward brunch, trying his hand at turkey sausage quiche, bourbon-infused French toast and brown sugar pecan waffles.

Wilson’s Esquire Eats logo was designed by a friend. Courtesy of Darryl Wilson.

He also created an Instagram account, @_esquireeats_, where he regularly posts photos of his dishes for a wider audience. A graphic designer friend created his logo, which is a cartoon version of Wilson wearing both a suit and a chef’s uniform. Some of his early creations had law-related names, such as chicken caprese per curiam and 5th Amendment wings.

Wilson mentioned in one of his posts that he turned his “passion for cooking into therapy to make it through the ‘uncertain and unprecedented times.’” He says he continues to encourage other people, especially lawyers, to take their mental health seriously.

“We work in one of the most stressful professions that there is out there, and we always have to find things that make us happy and that are fulfilling or rewarding to us,” says Wilson, who also serves as the diversity and inclusion director for the ABA Young Lawyers Division. “Mine just happens to be cooking.” 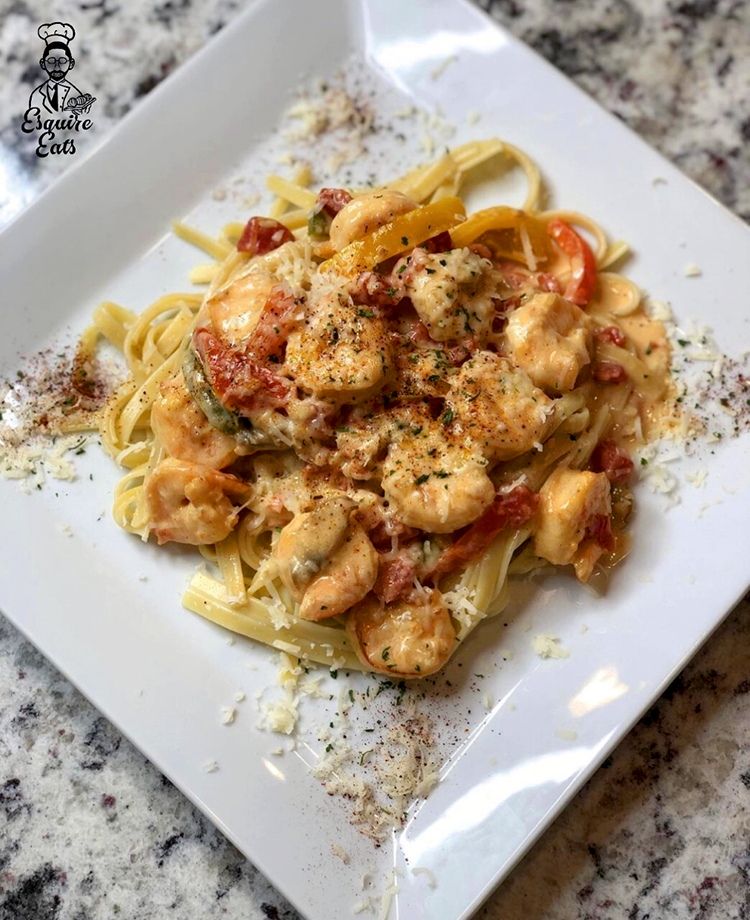 Shortly after Wilson created Esquire Eats, some of his friends and colleagues in the YLD caught wind of the account and began asking him to lead a cooking class.

Although Wilson says he wasn’t sure if he was quite “Top Chef material,” he agreed to teach attendees of the YLD and Section of State and Local Government Law’s joint virtual spring conference how to make his Creole shrimp pasta last April.

His one-hour class received such positive reviews that he volunteered to host another one at the YLD’s virtual fall conference in November. That time, he offered a longer (90-minute) class during which he talked attendees through putting together a full meal with chicken marsala, garlic mashed potatoes and sauteed spinach.

Wilson enjoyed both experiences but says he wants to overcome a few obstacles associated with teaching remotely from his own kitchen. 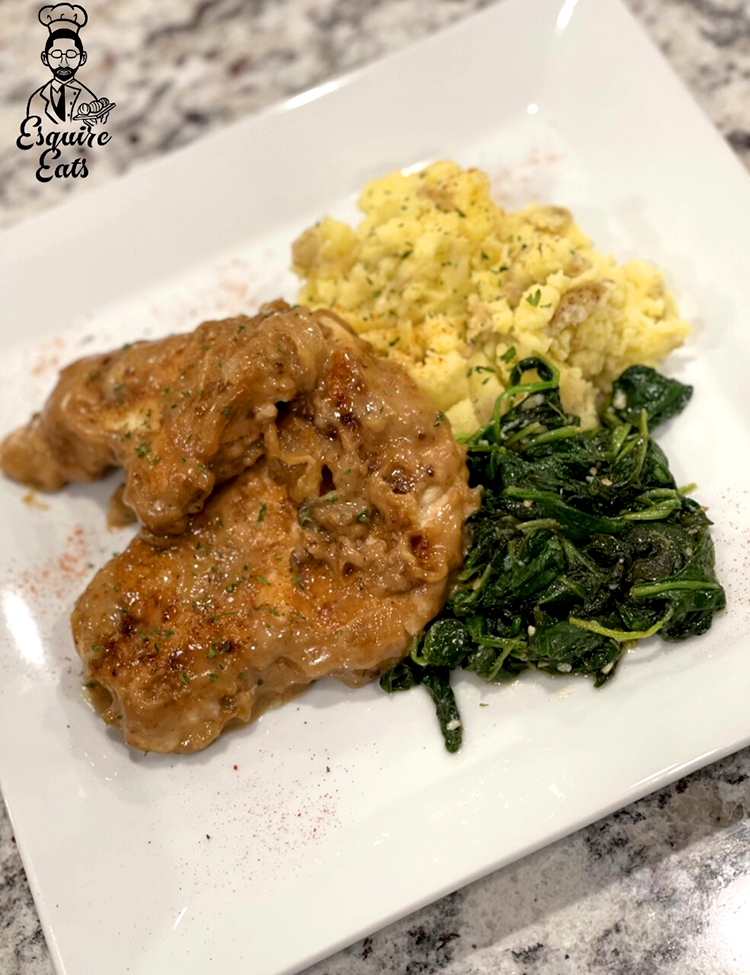 “They go over well, and the way my kitchen is set up, it’s open so it allows me to maneuver and show things,” Wilson says. “But I really think if we had a production crew, it would be so much better. I could be narrating it, and someone could be following me around the kitchen with a camera for better angles.”

Wilson, who has jokingly offered to feed any volunteers, adds that if the YLD hosts a future in-person meeting in Las Vegas, “maybe Gordon Ramsay will let us borrow Hell’s Kitchen, and we can do a kitchen class.”

Tamara Nash, the secretary of the YLD, met Wilson three years ago at the ABA annual meeting in San Francisco and has worked closely with him since then. She wasn’t at all surprised to see him leading a cooking class.

“It’s another example of Darryl stepping up to the plate,” says Nash, the director of experiential learning and a lecturer at the University of South Dakota Knudson School of Law. “Cooking started as a fun, creative outlet for him and turned out to be a thing that brings people together around him, which is just another display of who he is. People gravitate to him.” 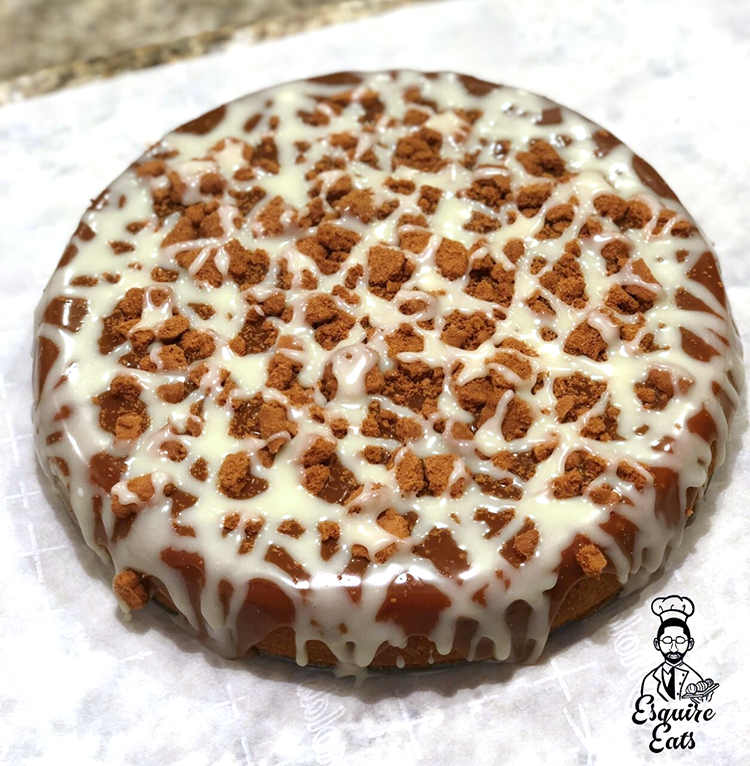 Wilson got his inspiration for his cookie butter cheesecake recipe from the Biscoff cookies he was served on an airline flight. Photo provided by Darryl Wilson.

Wilson isn’t hosting any upcoming classes, but he has received requests for some of his more popular recipes, including his cookie butter cheesecake. Even though the dessert involves a tedious process and takes about 24 hours to finish, he still counts it among his favorites since it was inspired by his love for the Biscoff cookies he enjoyed on early-morning flights.

Wilson aims to improve diversity and inclusion in legal profession

In recent years, Wilson also has focused on helping the YLD and the greater ABA increase diversity in the legal profession.

Wilson, a 2014 graduate of the University of Mississippi School of Law, was selected in 2019 for the YLD Scholars Program, which aims to encourage more minority, solo or small firm, government, private sector and military service attorneys to become active in the division.

In addition to working with the YLD’s diversity and inclusion team, he served on the Commission on Racial and Ethnic Diversity in the Profession during the 2020-2021 bar year. He is currently the chair of the Legal Opportunity Scholarship Fund Committee, which annually grants financial aid to diverse students for their three years of law school.

“I have also spent a lot of time mentoring undergraduate students who come to me and share an interest in law school,” he adds. “I try to do whatever I can to get them there and to also make sure they stay there.”

Daiquiri Steele, one of the YLD’s representatives to the House of Delegates, first worked with Wilson when he helped her in her role as the division’s assembly speaker a few years ago. Now, as a fellow leader, he “does a lot for the association but is also someone who thinks outside of the box—which will explain things like the cooking class,” she says.

But, Steele adds, it is Wilson’s enthusiasm that really catches people’s attention.

“His enthusiasm is downright contagious,” says Steele, an assistant law professor at the University of Alabama School of Law. “He has this interesting hybrid approach. On one hand, he’s very organized, incredibly structured, but then he’s also incredibly creative. And so they make for a perfect pairing.”