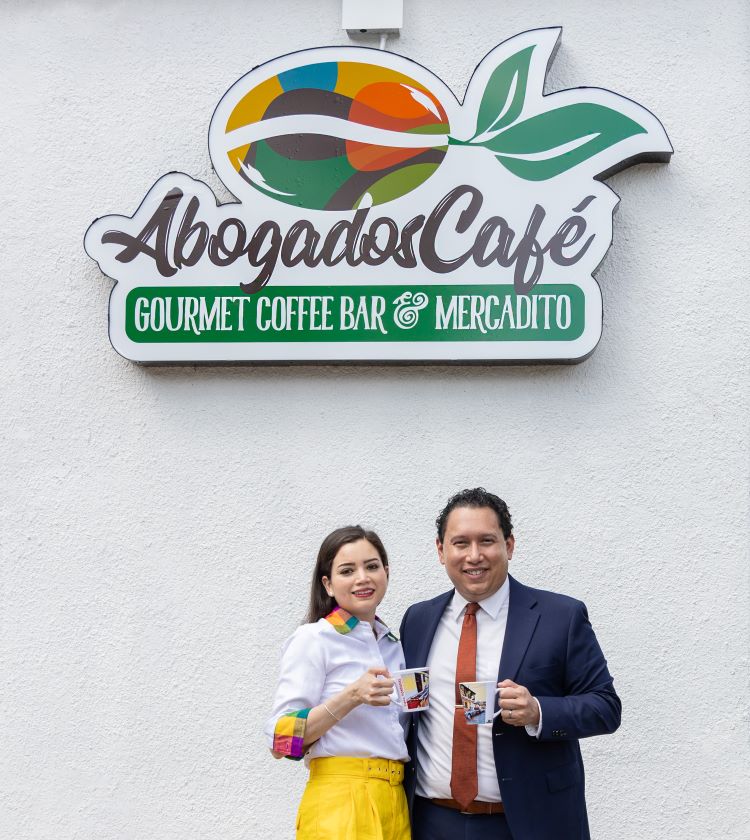 The NDA is the name of one of the gourmet coffees at the Abogados Café in St. Paul, Minnesota. Just don’t ask the husband-and-wife team who own the cafe to tell you what’s in it.

Given that the beverage is named after a nondisclosure agreement, the couple, lawyers Ofelia Ponce and Inti Martínez-Alemán, are adamant that its ingredients must remain confidential. Even when pressed to reveal the coffee’s secret recipe, they do not fold.

“What we can tell you is it is one of our customers’ favorite drinks. It’s yummy,” says Martínez-Alemán.

Fearless Lawtte—a concoction with cayenne and cinnamon—the sweet coconut-infused Motion Granted and the no milk Ex Parte—with notes of lavender and French vanilla—are among the other specials on the Abogados Café menu.

Other law-themed beverages include the Sua Sponte and the Rico Lawtte (“Rico” is also Spanish for “delicious”). Even “Abogados” translates to “lawyers” in English.

If the legalese sometimes trips customers up, Ponce and Martínez-Alemán are happy to enlighten them. The coffee shop opened in the summer. And Ponce says the emphasis on the legal profession makes it unique, and “for people outside the law, it’s an educational experience too.”

Brewing up some background

The couple were born and raised in the city of Tegucigalpa, Honduras. They are high school sweethearts who married in 2018 and studied law at the Mitchell Hamline School of Law in St. Paul, Minnesota. Though both are lawyers, only Martínez-Alemán is licensed to practice in the United States.

Martínez-Alemán once handled business litigation in Honduras, partnering with his mother, Judith Alemán Banegas, who was also an attorney. In 2011, she was gunned down and assassinated after a lunch meeting, along with her driver and legal assistant. She was 56 years old.

Devis Leonel Rivera Maradiaga, the former head of the Cachiros cartel, is suspected of ordering the assassination. Martínez-Alemán’s mother is named as one of 78 of Rivera Maradiaga’s victims in a cooperation agreement with the U.S. government.

“My mother might have affected the interests of the largest drug lord in Honduras, and so he confessed to having ordered her assassination. But we don’t know why,” Martínez-Alemán says.

After his mother’s death, he eventually started a new life in the United States with Ponce. Together, they also run the Ceiba Fôrte Law Firm, a bilingual firm that serves Hispanic clients. His office is just upstairs from the coffee shop.

Martínez-Alemán says his mother also had ambitions to one day open a hotel or a restaurant, and he is sure that she would be proud of what the couple have built.

“The essence of what she wanted is in the coffee bar, which has very strong Latin American roots and bright, clean colors,” he says.

‘Bringing people together’ for a cup of joe

Naturally, the coffee shop has attracted quite a few lawyers and judges, according to the couple. They say some lawyers host meetings at the shop, and that their coffee, which comes from beans supplied by a local roaster, is also delivered to state court judges and clerks.

Naomi Lopez is a first-year student at the University of Minnesota Law School. Photo by Joseph Cardoza.

Located in the Como Park neighborhood in the northwestern part of St. Paul, Minnesota, the shop is also a place for some law students to hang out. Naomi Lopez, a first-year student at the University of Minnesota Law School, says she first heard about it on Instagram.

Lopez says she is attracted to the shop not only because she is a “coffee snob” but because she appreciates that it is a Latino-owned business. She says she goes there to commiserate with Ponce about her first year in law school.

“It makes me feel comfortable and seen,” says Lopez, adding that the business is also raising awareness that “Latinos are participants in the law and can have authority in the law.”

Matt Anderson is a local lawyer who was born and raised in the neighborhood. His office is less than half a block away from the Abogados Café, a small cream-colored office building with an outdoor patio.

Anderson says he was immediately taken with the interior, which has Latin-inspired stylings, including Talavera tile on the floor, a colorful mural of an Antigua Guatemala cobblestone street, wooden shelves and planters, tile archways and paintings from Honduras and Ecuador.

He goes to the cafe to get his caffeine fix twice per week. His favorite drink is the Sippin’ Fall, a seasonal latte with real pumpkin and spices.

The coffee shop brings together lawyers who might be adversarial in or out of court but can forget about their differences over a cup of joe, Anderson says.

“It’s bringing people together and reminding us that we are in a profession together,” Anderson says.