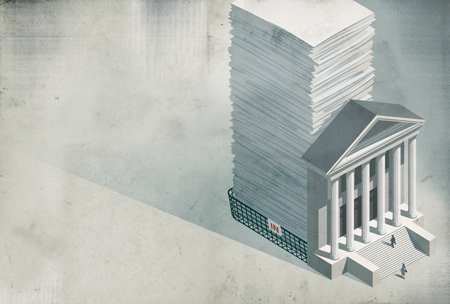 The virtual courtroom of immigration Judge Thomas Mulligan of New York City’s Varick Street court was not exactly a well-oiled machine on a recent August morning. The judge was occupied with master calendar hearings, the docket where respondents—they would be called “defendants” in other settings—acknowledged and answered the government’s charges.

These tend to go by quickly, as they’re mostly just pleading and scheduling for merits hearings at a later date. Mulligan set the next appearances for around November but emphasized that he did not actually expect these hearings to happen. They were placeholders while the parties worked to dismiss the cases under prosecutorial discretion, which he urged the U.S. Immigration and Customs Enforcement prosecutor to consider each time.

There was no objection from ICE to the judge’s efforts, setting up a head-scratching scene: removal cases neither the respondent and their counsel, nor the prosecutor, nor the judge seemed to really think should be on the docket. Yet there they all were, occupying their mornings and adding to the clutter of an already almost unmanageable court backlog.

There’s no single or simple cause. It’s been driven by a multitude of factors, including outdated technology, shifting legal standards, global political developments driving migration, as well as policy moves from multiple White House administrations—which are especially impactful because the immigration courts are administrative courts under the Department of Justice, a part of the executive branch, unlike district courts, which are part of the judicial branch. These factors all combine to create a chaotic system that lawyers say sabotages their ability to build an effective case and makes a mockery of due process, to disastrous effect on their clients.

Both prosecutors and the judges are under pressure from the Biden administration to clear cases. This results in situations like those described from Mulligan’s courtroom, or the more dreaded scenario for lawyers, when their cases are either massively pushed back or suddenly advanced.

“The docket management is just not there,” says Ellen Pachnanda, the supervising attorney for the New York Immigrant Family Unity Project at Brooklyn Defender Services, an immigration public defender program created and funded by the city of New York.

“We have cases that have been open for like six years that are still pending a court date,” Pachnanda says. “On average for nondetained cases, though, you’re looking at about two to three years.”

Karla McKanders, who directs Vanderbilt Law School’s Immigration Practice Clinic and serves as the chair of the ABA’s Commission on Immigration, echoes Pachnanda. “When I started about 15 years ago, I could take on an asylum case, and within a three-month time frame you’d get a hearing before a judge. Now that time frame has stretched up to a five-year waiting period just to get a court date.”

“The impact of that on nonprofit organizations or solo practitioners is that it’s really hard to maintain a case, and a docket of cases, for a five-year time period,” McKanders says. “People leave the organization—attorneys—and so you don’t have the continuity of service with the client.”

Five years later, she adds, there’s a greater likelihood for inconsistencies in the details surrounding the case, itself: country conditions might have changed, the petitioner’s personal circumstances might have changed—this all risks tanking their case.

While a casual observer might assume that the backlog is wholly driven by an increased number of court proceedings, that’s only part of it, according to Gracie Willis, staff attorney with the Southern Poverty Law Center’s Southeast Immigrant Freedom Initiative.

“The newly filed cases begin to rise around 2017 to 2018, but the backlog had been precipitously rising since 2013. So, it’s not like you have these two lines that run parallel where you can say the increase in the backlog is due directly to the number of cases that are filed,” Willis says. Rather, she says the backlog is a result of simple mismanagement, a structure where cases alternately go before judges before they’re ready—or long after they’ve been prepared.

After a dedicated docket for Central American families with children was established in 2014, she remembers other clients suddenly having cases pushed back years.

“Clients would come in and be like, ‘My court date isn’t until 2019,’ and you’d have to explain to them, ‘No, it’s not. It could be before then; it could be after. We have no idea,’” Willis says, which made it difficult to find pro bono attorneys to take the cases—or even nonprofit legal providers to guarantee a continuity of service.

The delays themselves could even directly affect a chance at staying in the country, such as clients who qualified for a special form of relief available to parents of U.S. citizens or residents under 21 years old having their children age out of eligibility, she adds.

The intuitive fix is trying to clear the cases by simply speeding them up, setting target deadlines for completion, a move that practitioners support—to a certain extent. In practice, that can lead to its own due process concerns.

For example, so-called “rocket dockets,” like the dedicated docket for families mentioned above, have been rife with concerns over due process since the Obama administration first implemented them, with inquiries finding that many respondents didn’t have proper time to secure counsel.

Dismissing cases outright can have its own pitfalls. Some avenues for relief, like cancellation of removal, are only available through the court system. Having a case dismissed with no formal resolution takes a respondent out of the immediate danger of a removal order, but it leaves them with nothing concrete—no status, no protections, no guarantee that the government won’t refile the case later.

The problem now is that dysfunction begets dysfunction. Everyone from clerks to judges is underwater, and the disorder of the system keeps slowing it down further.

The Executive Office for Immigration Review was one of the last court systems in the country to adopt electronic filing, launching a pilot program in 2018 and finally mandating attorneys and accredited representatives e-file court submissions this year.

Further complicating matters, the fate of Title 42 was for a long time undetermined. The Trump-era border policy used a public health statute to practically shut down the border to asylum-seekers in March 2020. Migrants without documentation were expelled without further process, regardless of their intent to seek protections.

In April of this year, the Biden administration announced that the policy was being rescinded. However, in May, the attempt to rescind the order was enjoined by Judge Robert Summerhays of the U.S. District Court for the Western District of Louisiana. In November, a federal judge in the District of Columbia ruled that the policy is ” is arbitrary and capricious,” but stayed the ruling until Dec. 21.

If the administration finally does get rid of the order, thousands of people who have been waiting for their chance to tender lawful asylum claims—including many who have been expelled at least once under Title 42—will likely try to do so in short order, threatening to further overwhelm the system.

In a statement responding to the latest court development, ABA President Deborah Enix-Ross said, “… Title 42 has blocked asylum seekers from applying for protection at the border and led to their expulsion from the U.S. without adjudication of their claims,” adding that the ABA House of Delegates voted to oppose this policy last February. “We welcome the move to resume normal processing of asylum seekers, as required under domestic and international law,” Enix-Ross said.

The current administration has made some efforts to address the backlog, like setting a new prioritization scheme for arrests and introducing a more standard procedure for the exercise of prosecutorial discretion. However, these were derailed last year by an injunction ordered by Texas U.S. District Judge Drew B. Tipton, which the Supreme Court has allowed to remain in place, blocking the government from applying any discretion to enforcement and prosecution of immigration violations.

In a statement responding to questions from the ABA Journal, an Executive Office for Immigration Review spokesperson noted that the agency’s fiscal year 2023 discretionary funding request included funding to hire up to 834 immigration judges and supporting agency personnel. They added, “EOIR is committed to ensuring each person in immigration proceedings has their day in court, and the length of any given proceeding is dependent on the particulars of that individual and case.”

A recent Interim Final Rule to grant initial jurisdiction of defensive asylum claims to U.S. Citizenship and Immigration Services asylum officers instead of the courts is being phased in very slowly, and it allows denials to be appealed to the courts anyway.

A more wholesale change, which the ABA has supported, is to simply take the immigration courts out of the executive branch entirely and make them independent, which would stop successive presidents from imposing their preferences on the beleaguered system.

“People want to take the courts out of political fray,” says McKanders, the immigration commission chair.