What Netflix's 'Tiger King' says about gun culture in America 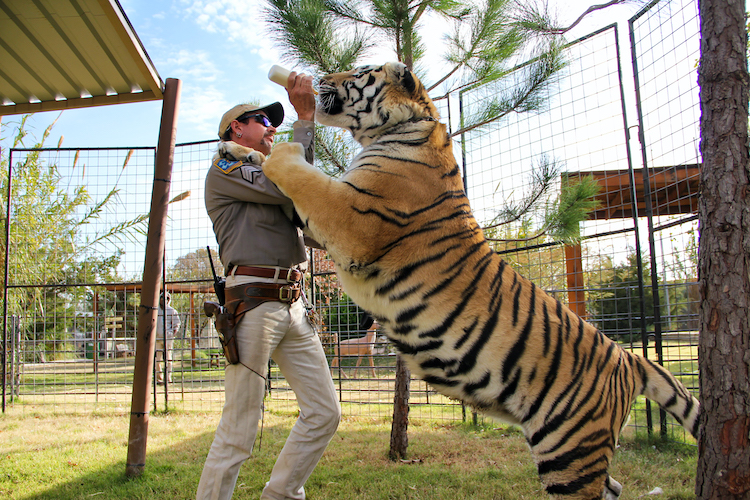 During arguably the most harrowing scene in Tiger King, Netflix’s unhinged, blockbuster docuseries, one of Joe Exotic’s multiple husbands kills himself with a gun. Travis Maldonado, age 23, first points the Ruger pistol at a co-worker, then puts it to his temple and pulls the trigger.

It appears Maldonado believes the gun wouldn’t fire “without a clip.” The camera shows his co-worker, Joshua Dial, in shock. “It’s not like in the movies,” Dial says later. The filmmakers let his words hover. Not like the movies how? Not the sanitized version of a firearms death portrayed by Hollywood?

With Tiger King, Netflix promises “murder, mayhem and madness,” and the seven-part series delivers. The show is set mostly in Oklahoma—a gun-friendly, open-carry state. The star of the show, Joseph Maldonado-Passage (better known as Joe Exotic), is never seen without a revolver on his hip or without a rifle in his hands.

Maldonado-Passage relishes his right to bear arms, shooting carelessly and incessantly at objects, at friends; blowing up things, detonating effigies; threatening to shoot and/or blow up people. Guns are everywhere. Explosives are stockpiled. Why does Maldonado-Passage, or anyone, need an arsenal this large? Why is this OK outside a war zone?

Early in the novel coronavirus pandemic, while many Americans raced to hoard hand sanitizer, gun enthusiasts queued up for ammo and weapons in case access to firearms was cut off. Perhaps they envisioned a Mad Max-style world of looting and anarchy, where they would have to fight off frenzied mobs desperate for Clorox wipes and toilet paper and would need plenty of weaponry.

And the anticipated marauding vagrants didn’t materialize. In many cities, crime rates have dropped by double digits as a result of stay-at-home orders. On the other hand, authorities are worried about increases in domestic violence and child abuse, a fear compounded by the presence of firearms in the home. A USA Today analysis found that calls for domestic disturbances and violence surged by 10% to 30%.

The problem with guns in homes, particularly during stressful situations such as sheltering in place, is that ease of access can lead to deadly escalation. Abusers with firearms are five times more likely to kill their victims, according to a 2019 study by Everytown for Gun Safety. And when it’s not a homicide, firearms are often used for suicide.

Statistics show that guns are rarely used for self-defense. That certainly was my experience reporting for nearly 10 years in states with enthusiastic firearms owners such as Joe Exotic and lenient gun laws. I can recall covering exactly one story where someone successfully defended themselves and their property with a gun.

On the other hand, I couldn’t begin to tally the countless murder-suicides, domestic violence killings, accidental shooting deaths, intra-family murders, school shootings, vendettas, death by cop and other gun homicides I regularly covered for evening news live shots. If it bleeds, it leads—that was certain.

Gun Violence as a Disease

Last year, leaders from 43 national medical organizations and the American Bar Association convened for the first-ever Medical Summit on Firearm Injury. The group’s recommendations included recognizing firearms injuries as a public health crisis and approaching the epidemic as a disease.

“This approach involves not only engaging firearms owners as part of the solution—not the problem—but also engaging people who live in communities at risk as part of the solution and not the problem,” organizers concluded. “We believe this can be done in a manner which preserves (or even enhances) freedom. This professional approach requires freedom with responsibility.”

Unfortunately, gun fanatics and the NRA are looking for freedom without oversight. The gun lobby reflexively opposes even the most commonsense firearms regulations, cloaking their cause in constitutional smoke and mirrors that would make the framers turn over in their graves. Joe Exotic warned that if anyone tried to take his stockpile away there would be “another Waco.”

After Tiger King, I happened to catch a The Godfather-style Nigerian drama, King of Boys, also on Netflix. The preview and premise of a female crime boss were compelling, but what I found most interesting, and jarring, was that brutality in the movie wasn’t sugarcoated.

In one scene, a man takes his own life. And for a brief moment, they show him in his chair with a gaping hole through the top of his head and a woman screaming. I wondered whether that’s what Dial meant when he described the dissonance of Maldonado’s death. In real life, bullets cause catastrophic, horrific damage—victims don’t evaporate in a puff of smoke.

Video games, the news and Hollywood have inured the public to the idea of violence while camouflaging the grisly consequences. At many TV stations where I worked in daily news, we weren’t even allowed to show body bags.

Nothing to See Here

Among other complaints, Tiger King has been criticized for failing to fully explore its central theme—exploitation and abuse of exotic animals. This isn’t an accident. Netflix marketers knew what they were doing.

The average viewer may not tune in for a morality lesson about the dysfunction of roadside zoos and big cat trafficking, but they will certainly stop to gape at a train wreck. With all of Tiger King’s mind-numbing plot arcs and depraved twists, the question of Maldonado-Passage’s firearms and explosives arsenal may be one of the least standout issues for many.

In Tiger King, the bombs and bullets seem to fade into the background, just as they do every day in America.