President of the Legal Services Corp. reflects on his tenure

Asked to reflect on his nine-year tenure as president of the Legal Services Corp., Jim Sandman says he is proud of many things that he and his team accomplished.

Under Sandman’s leadership, the LSC produced its seminal work, which found that 86% of civil legal needs reported by low-income Americans in the past year were either inadequately addressed or not met at all.

He also embraced the role of technology in helping bridge that gap by delivering important legal services to people who often face what he believes is an unacceptable binary choice when it comes to being involved with the legal system: Either you have a lawyer, or you have nothing.

Additionally, he established the Office of Data Governance and Analysis to help legal aid organizations collect and analyze data, and expanded congressional support for the LSC’s Technology Initiative Grants program (the team behind the TIG grants was named a Legal Rebel for 2020).

Because the LSC is dependent on Congress for funding, Sandman is also proud that his team has succeeded in increasing bipartisan support for the agency’s mission.

Sandman stepped down as LSC president in February. He joined the agency as its president in 2011 after a four-year stint as general counsel for the District of Columbia Public Schools; before that, he spent 30 years at Arnold & Porter, where he served as firmwide managing partner for a decade. According to Sandman, the LSC job allowed him to pursue a cause he cared deeply about, increasing access to justice, while putting to use the management skills he had attained throughout his professional career.

When it comes to technology, Sandman says he has always seen its potential in helping bridge the access-to-justice gap.

“Technology provides a very efficient and cost-effective way to get essential information into the hands of people who would otherwise have no information at all,” he explains. “The availability of online access to resources helps to eliminate what used to be a monopoly on information help by lawyers where only a lawyer could tell you what you needed to know about a legal problem.”

Sandman adds that technology delivers very focused information about the most common problems affecting low-income people, including evictions, foreclosures, protection orders, and child custody and support proceedings. “It makes a huge difference in giving people access to information they need to have any hope of availing themselves of the justice system,” he says.

If anything, Sandman is disappointed that it has taken so long for technology to gain a foothold into the legal industry. He notes that lawyers are often set in their ways and may not feel much of an incentive to change, especially if they can make a comfortable living maintaining the status quo.

“I think we need better instructional tools,” he says. “We need to do a better job of explaining to lawyers how their lives and practices will be better and easier if they embrace technology.”

He posits that peer-to-peer selling may be the best approach to try to get lawyers to embrace technology, because they are often more willing to experiment if someone they know and trust does it first and reaps the benefits.

As for the future, Sandman believes wholesale regulatory reforms are necessary in order to help bridge the access-to-justice gap and wholeheartedly endorses a slew of controversial reforms, including allowing nonlawyers to provide legal advice in limited, highly regulated instances, and ending the ban on nonlawyer ownership of law firms and fee splitting.

Sandman says he intends to take on a full-time position at a law school where he will continue to advocate on behalf of increased access to justice and regulatory reform. Most recently, he was named chair of the ABA’s Task Force on Legal Needs Arising Out of the 2020 Pandemic.

“I plan to remain very active,” he says. “You have not heard the last of me.” 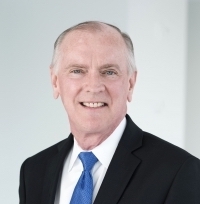 Jim Sandman is president emeritus of the Legal Services Corp., the nation’s largest funder of civil legal aid programs for low-income people, supporting 132 independent programs with more than 850 offices serving every state and territory. He was president of the LSC from 2011 to February 2020. Sandman practiced with the law firm Arnold & Porter for 30 years and was the firm’s managing partner for a decade. In 2007, he began a new career in public service, starting as general counsel for the District of Columbia Public Schools.