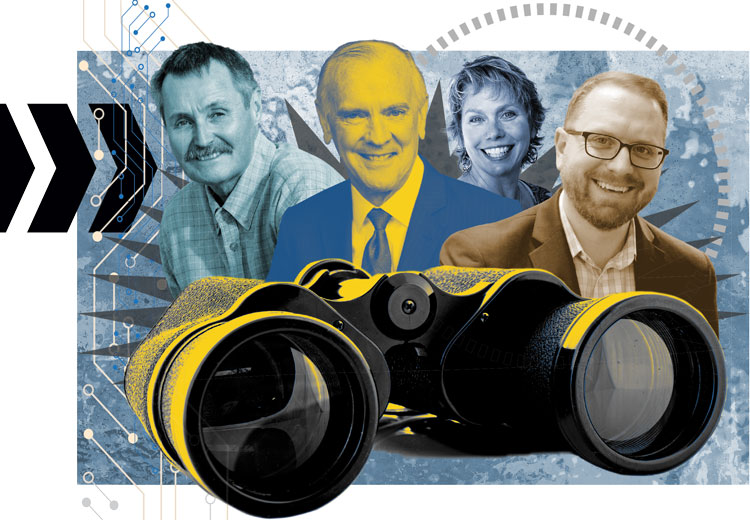 “I had a lawyer follow me out to my car, yelling at me that his clients were too stupid to use fax machines,” says Raby, who was a program analyst for the Legal Services Corp. from 2000 to 2008. Raby is now executive director of the Florida Justice Technology Center and serves as co-vice chair of the State Bar of California’s Task Force on Access Through Innovation in Legal Services (see “Outside the Box”).

However, she saw the transformative potential of technology and its ability to help all people attain access to justice.

She says the legal profession didn’t understand the automation possibilities of technology, and some legal aid lawyers believed only people—not computers—could help clients with problems.

Their belief was that using technology would create a second-tier legal system to the traditional model of one attorney for every client.

“That model doesn’t scale, and it’s never going to reach all the people who need assistance,” Raby says. She adds that for self-represented litigants who don’t qualify for legal aid, it’s better to have access to high-quality information and do-it-yourself tools than to settle for no assistance at all.

Despite all of the resistance, Raby and Rawdon both say that to their surprise, their LSC bosses did not back down from criticism about technology. They also point out it was unique that management oversight was not onerous or burdensome and that LSC was willing to take a risk to try something new.

“Because LSC took the position of letting us make structural decisions based on what we were hearing in the field and overall objectives of the program, we were able to be very responsive to the legal aid community, and that’s kind of what made the TIG program useful,” Raby says. “It was either that they didn’t understand the impact of what we were getting ready to do, or they had an inkling that it was going to be big and didn’t know how to manage it.”

And as legal aid directors saw the successes that other offices were having with technology, they opened up to it, Rawdon says.

Specifically, intake workers in the Ohio offices were saving 14 to 16 minutes per application once they adopted online intake forms, allowing them to process more of them.

“I won’t say there’s been universal acceptance. I’ve been kind of disappointed that programs aren’t more willing to adopt automated documents for staff usage,” he says, adding that some lawyers still think that if you don’t physically fill out every form for every client, you might miss an error.

However, some legal aid directors who originally opposed the idea of introducing technology to client services have since changed their minds after seeing positive results, Rawdon says.

Since 2000, approximately $65 million has been awarded by the TIG program. Among the offerings by grant recipients are automated forms and document assembly for Michigan residents, and a mobile interface enhancement that allows people to apply for services with the Montana Legal Services Association. That project also added texting capacity with the office’s case management system so that clients get text reminders about appointments and can submit forms into the system from their phones.

In 2018, the TIG program received 58 letters of intent that were whittled down to 38 full applicants. Ultimately, 26 grants were awarded. James Sandman, president of the LSC, decides who gets the grants. (Editor’s note: On Jan. 21, after the February-March issue went to press, Sandman announced he would leave LSC in February.) When the TIG program started, he says, many legal aid offices didn’t even have websites.

“The first order of business was to fund website development of every state and territory with two populations in mind—first, low-income people, and second to … pro bono lawyers, who might be taking on a client where they needed help,” he says.

When considering TIG proposals, Sandman looks for ideas that can help various legal aid offices rather than just the grant recipients.

He mentions a 2018 grant for $212,000 to Philadelphia Legal Assistance to expand software tools for a program known as Upsolve, which generates Chapter 7 bankruptcy forms through a series of questions. (See “Going for Broke,” September-October 2019.)

“That has a nationwide impact because bankruptcy is a matter of federal law,” Sandman says. “We’ve also funded projects for online intake to make legal services available to people 24/7.”

Rather than being given a lump sum, TIG money goes to recipients in pieces as project milestones are reached. If something doesn’t go as expected, the plan can be modified, which helps the offices learn from their mistakes and ultimately have better outcomes, says David Bonebrake, a program counsel and grant administrator with the program, who with Rawdon and grant administrator Jane Ribadeneyra helps applicants with proposals.

One TIG recipient, Legal Aid Chicago, is working on a project that involves integrating natural language processing and other artificial intelligence tools into its intake system. “Think Alexa or Siri,” says Vivian Hessel, Legal Aid Chicago’s chief information officer. Her organization in 2018 received a $266,000 TIG award, which will be paid over three years.

“Now, typically, a human listens to or reads the problems,” she says. The software can review messages and pull out potential issues quicker than a person could, and then send the messages to the right staff member for review. Once the project is in place, she adds, the call-in line will still be available as well.

“A person might say, ‘I’ve been evicted because I couldn’t pay my rent.’ The landlord is not doing anything wrong, and the reason they could not pay their rent was because they were terminated from their job and were not paid by their employer. That’s the legal issue,” Hessel says. “The software can’t pick up on that, but it pinpoints the information quicker for the attorney.”

The office has never been able to help everyone who qualifies for legal aid in Chicago, she adds, and the software will allow one full-time employee to review three times more intakes than before. “It’s a lot better for a person with a legal issue, because a lot of times people feel like they are not being heard. Access to justice is about people feeling the system is fair. Even if you can’t help people, just being heard is important to them,” Hessel says.

This article first appeared in the February-March 2020 issue of the ABA Journal under the headline “A Rewarding Mission: The Legal Services Corp.’s Technology Initiative Grants Program team is trying to increase access to justice–one project at a time”