Judge Scott Schlegel’s history of utilizing technology in his Louisiana courtroom to make life easier for attorneys and members of the public has come in very handy during the COVID-19 pandemic.

When the public health crisis forced the closure of Jefferson Parish courtrooms earlier this year, Schlegel contacted those he knows in the legal tech world for assistance in bringing to fruition a plan to remotely accept guilty pleas in criminal cases.

The form Documate created was placed on a new website Schlegel launched within a week of the court buildings being shut down, he says.

Schlegel would host a hearing via videoconference for defendants who moved forward with accepting pleas, and he would provide the defendants with an opportunity to speak with their attorneys in a virtual breakout room.

Schlegel says the assistance of Documate was instrumental in the remote guilty plea process being implemented in short order, as were his years of experience collaborating with the different parts of the local justice system on technology projects.

“Because of those partnerships and because we understood our workflows, we were able to find an appropriate tech stack that fit our workflow and our needs,” says Schlegel, who was first elected to the bench in 2013.

Meanwhile, it was a collaboration with LawDroid CEO Tom Martin that allowed Schlegel to implement a process for checking in with specialty court probationers under his jurisdiction amid COVID-19.

Martin created a text-based chatbot that would send messages to probationers to see whether they were doing OK, and it was launched within weeks of development.

“Part of keeping people healthy so that there are no more victims are these frequent contact points to help people get healthy,” says Schlegel, who was recently named an American Legal Technology Awards winner in the court category.

The judge has also been remotely holding hearings on motions to reduce bond during COVID-19, which has generated a flurry of such filings from prisoners.

Additionally, the judge is encouraging counsel in civil cases to join him and his staff on a shared Slack channel for a “perpetual status conference” as part of a pilot program.

“I’ve yet to have anybody join me, but I’m looking for some brave lawyers who are interested in an asynchronous practice of law that we use constantly in criminal and works extremely well,” Schlegel says.

As for those judges who have been forced by COVID-19 to embrace technology in ways they previously were reluctant to, Schlegel recommends they “don’t stop at Zoom.”

Bench officers should also consider the use of websites, online calendars, e-signature tools and text or email reminders to provide access to justice in a remote fashion.

“I could go on and on and on with a list of simple inexpensive technologies that we can implement in the justice system to make it more efficient, more effective and more accessible, even during a time of need,” he says. 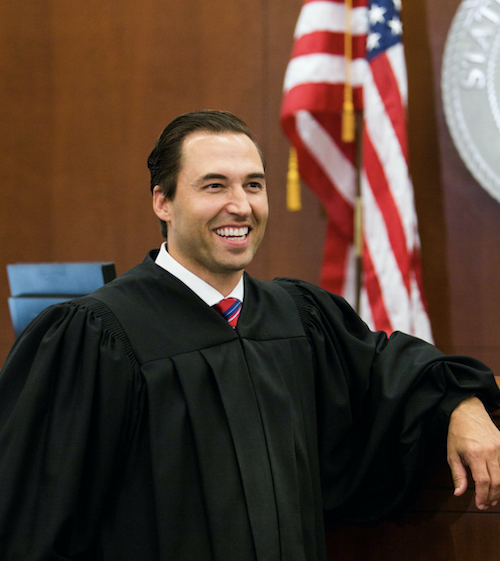 Judge Scott Schlegel was elected to the 24th Judicial District Court in Jefferson Parish, Louisiana, in May 2013. He handles criminal, civil and domestic cases, and he is also the chair of the 24th Judicial District Court’s Specialty Treatment Court Committee. Schlegel has consistently incorporated technology into his courtroom operations, including during COVID-19. He was recently named an American Legal Technology Awards winner in the court category.