Behind bars in Scandinavia, and what we can learn 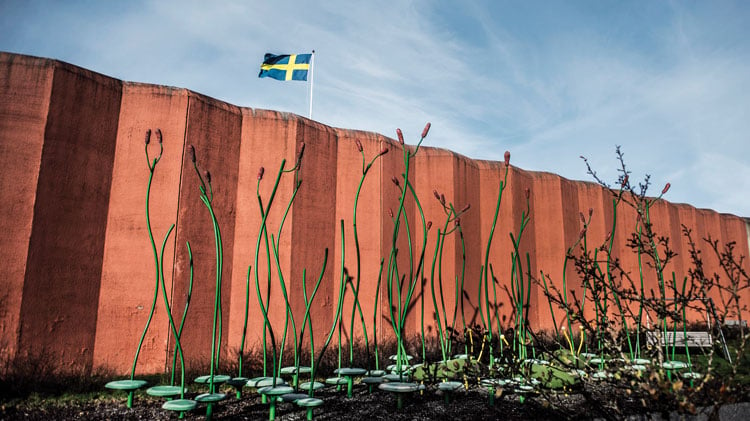 Outside Österåker Prison near Stockholm. Photo by Elin Aberg/ABA Journal

It wasn’t the sentiment I expected to hear from a guard describing his interaction with inmates at the high-security prison outside Stockholm. Max, who is also a counselor at Österåker Prison, was addressing a group of men with convictions ranging from drug trafficking to homicide, and he was reassuring everyone that they were in a safe space. Corrections officers in Sweden are trained to carefully cultivate relationships with the inmates they guard, with the goal of promoting rehabilitation, ensuring security and working toward reentry.

Before my visit to Österåker, Hanna Jarl, director of the Swedish Prison and Probation Service, told me that guards do not carry guns.

Despite her clear English, I had trouble translating.

“No one has guns?” I repeated back.

“Except perhaps in a perimeter tower?”

“No, there are no guns,” she said again.

“But some guards somewhere on the prison grounds have guns, correct? Perhaps at your maximum security prisons?” I persisted, like a broken record.

“In Sweden, we are working close to the inmates,” Jarl explained. “And that’s our best security tool instead of using guns.”

The Swedish Prison and Probation Service refers to inmates as “clients,” and says its emphasis on rehabilitation reduced recidivism from 42% to 29% over 16 years. In the U.S., the recidivism rate for inmates in state prisons was 68%, according to the latest U.S. Bureau of Justice Statistics report. Corrections officers at Österåker attest to the changes they witness within prison walls, and inmates will tell you they are on a better path.

“Taking a urine sample is ‘an act of love to keep you from harming yourself,’” says client administrator Filiz Erkek. “We promote that quite hard here—it’s for the greater good.”

Erkek’s description of how guards at Österåker Prison approach inmates’ mandatory drug testing was just one of many dissonant moments. Inmates shared pats on the back, hugs and words of encouragement. Most had private rooms, and each ward had its own communal kitchen. It was a surreal and collegial world more akin to a university dorm than a U.S. penitentiary.

At Österåker, there are opportunities to learn job skills like tiling; inmates put on plays; there is a fully stocked library as well as a room set up like a normal apartment for family visitation, complete with a crib.

Guards are tasked with getting to know and understand each inmate, which helps with risk assessment and averting violence on the front end. They carry personal alarms in case of emergency. Some have nonlethal weapons like pepper spray or batons, and they are trained in martial arts. Violence against staff members occurs perhaps once a year, according to Erkek, and fights between inmates are rare. Prison administrators keep problem groups and gangs separated within the facility, with a limit of 20 inmates in each ward.

With a 1:1 staff-to-inmate ratio, security at Swedish prisons like Österåker is the polar opposite of comparable penitentiaries in the U.S. By way of comparison, the understaffed and notorious South Mississippi Correctional Institution in Leakesville has an inmate-to-guard ratio of 23 to 1.

Still, many Swedes are frustrated with police response as the level of violent crime has increased in recent years. Some consider the prisons to be too cushy and think that as a result, criminals don’t fear going to jail. Skeptics complain that prison amenities are a waste of government funds, while proponents say normalizing life is important to ensure inmates leave prisons as functioning members of society.

Instead, imprisonment in the U.S. usually involves barbaric living conditions, deprivation, pain and even death—whether it’s state-sanctioned or the collateral damage of violent life behind bars and/or lack of adequate health care.

It sounds grim, and when you consider that many people behind bars are nonviolent criminals, it also sounds hard to justify. Research indicates that lengthy sentences don’t increase public safety, and innocence projects have shown that an alarming number of the incarcerated are in fact not guilty of the crimes charged.

As an American journalist, my frame of reference is a carceral state that has packed prisoners into facilities with subhuman conditions, destroyed communities and created a crisis of mass incarceration—so it’s difficult to critique any system that’s taking a kinder, gentler approach.

“I heard there’s a lot of rape in U.S. jails,” an inmate at Österåker asked me at a 12-step meeting I attended. It was awkward. “Yes, sometimes,” I said.

“I heard that people are getting constantly raped, all the time—that’s what I heard.” He and the others stared at me for confirmation.

“There are a lot of bad things that can happen in U.S. prisons, yes.”

In the New York Times’ 1619 Project, which observes the 400th anniversary of the beginning of American slavery, Bryan Stevenson argued that the country’s brutal legacy of slavery and Jim Crow has given America the taste for the violent punishment that defines our current criminal justice system: “Too many Americans are willing spectators to horrifying acts, as long as we’re assured they’re in the interest of maintaining order,” he wrote.

But this security promise is a dog-whistle fallacy, and it’s slowly dawning on policymakers that more prisons and more cruelty are not public safety solutions—instead, they are often the opposite, and they are also draining public resources. There is a growing bipartisan consensus that the pendulum has swung too far, and reformers are working to dial back America’s multibillion-dollar prison-industrial complex. It’s a stretch to think the U.S. would duplicate Sweden’s system, but there certainly is a lot to learn.

This article ran in the February-March 2020 issue of the ABA Journal under the headline:”Prison Is Not for Punishment”