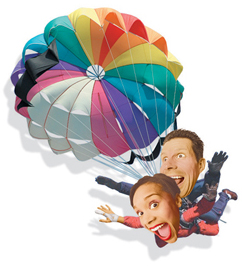 Few of us go through life expecting accolades for the commendable—OK, borderline valiant—things we do routinely each day. So when it be­comes necessary to defend oneself for having done a good deed, well, then the terrorists have truly won, or whatever it is they say.

Being punished for donning the figurative cape and tights to rush to the aid of a fellow citizen is roughly akin to rescuing little Timmy from the bottom of a well—only to have his mother point out that he’s missing a shoe.

When we do something truly exceptional, the expectation usually leans more toward a pat on the back than a kick in the teeth. When the latter occurs, who can blame a hero for wondering whether next time it might be better to be an observer?

Consider these examples of heroism smackdowns:

In February, 58-year-old Jim Mof­fett was helping two elderly women cross a street during a Denver snowstorm. Realiz­ing that a pickup truck was bearing down on them, he pushed the wom­en out of the way and was hit himself, reportedly suffering a brain injury, broken bones and a dislocated shoulder.

Moffett awoke in a hospital bed to learn that he had been issued a citation for jaywalking.

And in late July, a Seattle bank teller chased down a would-be robber, tackled him and, with assistance from a passer-by, restrained him until police arrived. Jim Nicholson, 30, was rewarded for his efforts with a place in the unemployment line.

That’s OK, said Nicholson, a self-described “adrenaline junkie” who admitted to the Seattle Times that he has chased shop­lifters while working at retail jobs.

But it’s not OK. A hero deserves a key to the city or at the very least a nice plaque, not a mu­nicipal citation or a pink slip—or a lawsuit.

Adrenaline junkies do things like jump out of a properly functioning airplane, as Lisa Nutley did in 2003 to celebrate her 33rd birthday. This being her first jump, she was ac­companied by an instructor. The worst-case scenario made an unwelcome appearance and Nutley, who is from New York City, found herself hurtling toward terra firma when her main chute failed to open.

Instructor Robin Rohemo of Sky­dive the Ranch in Gardiner, N.Y., with his own life at risk, feverish­ly managed to free up Nutley’s reserve chute, allowing her to re­unite with Mother Earth at a speed that didn’t guarantee a self-burial.

But neither Rohemo nor Skydive got so much as a fruit basket from Nutley, who, come to think of it, should have been charged a pre­mium for the extra thrill of a near-death experience. She sued for negligence because during that time when, you know, her life was being saved, two of her fingers were broken.

Skydive reportedly offered Nutley $5,000 to settle the suit and was re­buffed. It then filed a motion for summary judgment and sought to recoup the expenses incurred. The motion was denied and the case lingered for years until it was dismissed in August by an appellate court, citing assumption of risk.

So go ahead, be a hero, but don’t harbor an as­sumption of gratitude.