By Lee Rawles and Lorelei Laird 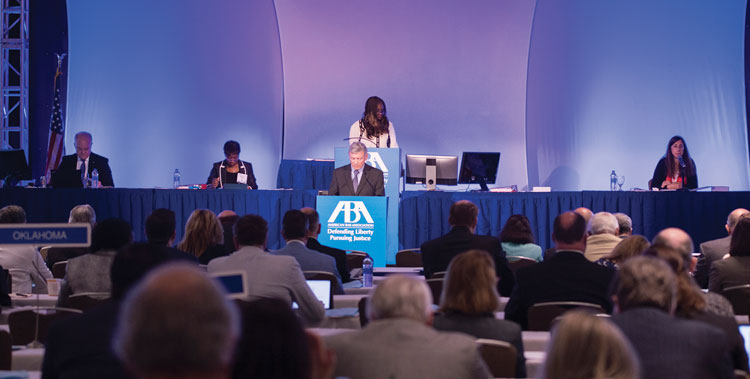 Photo of the ABA House of Delegates courtesy of ABA Media Relations.

After a year in which sexual harassment in the workplace has taken center stage, the ABA House of Delegates voted to urge legal employers not to require mandatory arbitration of such claims.

No ABA entity officially opposed it, but Resolution 300’s report noted that revisions were made in response to concerns raised by other entities.

The resolution was moved in the House by delegate Stephanie Scharf of Illinois, chair of the women’s commission. She said its broad support reflects the fact that “we are living in a time when men and women will no longer tolerate what really has been decades of staying silent about sexual harassment.”

She also noted recent research from the 2017-2018 Presidential Initiative on Achieving Long-Term Careers for Women in Law. Data cited in the resolution showed that 49 percent of female lawyers in America’s 350 largest law firms say they’ve had some kind of “unwanted sexual contact” at work.

“The ABA sets the gold standard in so many areas of law and policy,” said Scharf of Chicago-based Scharf Banks Marmor. “I ask you to set the gold standard here—that in our profession, victims of sexual harassment will choose how they wish to proceed and where.”

A nearly century-old shipping regulation is hampering Puerto Rico’s economic and physical recovery in the wake of Hurricane Maria last year, and Congress should enact legislation to permanently exempt the island, the ABA House of Delegates declared in another resolution.

The Jones Act, as the Merchant Marine Act of 1920 is known, places additional regulations and requirements on ships that travel between U.S. ports. It raises the cost of shipping, and every U.S. territory has been exempted from it, but Puerto Rico remains under its scope. “Estimates indicate that the Jones Act costs the Puerto Rican economy hundreds of millions of dollars every year, and in 2010 alone cost $537 million,” according to Resolution 10B’s accompanying report.

“Exemption from the Jones Act will not work miracles, but it would be a major step forward,” Miller said.

Resolution 116B urges that laws and policies be adopted to largely prohibit out-of-school suspension and expulsion for children in pre-kindergarten through second grade. The two exceptions cited would be if “(1) the student poses an imminent threat of serious physical harm to self or others that cannot be reduced or eliminated through the use of age-appropriate school-based behavior interventions and supports and (2) the duration of the exclusion is limited to the shortest period practicable.”

Resolution 116C urges courts and government entities to interpret Titles II and III of the Americans with Disabilities Act as applying to technology, and goods and services delivered via technology.

Resolution 101 amends ABA Model Rules of Professional Conduct 7.1-7.5, setting guidelines for lawyer advertising. Lucian Pera of Adams and Reese in Memphis, Tennessee, told delegates that in the decades since the 1977 U.S. Supreme Court decision in Bates v. State Bar of Arizona allowed lawyers to advertise their services, there’s been a “breathtaking variation in advertising rules” among states. The amendments were necessary to clarify and simplify these rules, said Pera, chair of the Center for Professional Responsibility.

Resolution 100B calls on Louisiana and Oregon to end the practice of permitting felony convictions by a less-than-unanimous jury vote.

Resolution 114 includes guidelines aimed at stopping incarceration of people solely because they can’t pay court fines and fees. The resolution adopts theTen Guidelines on Court Fines and Fees from the ABA Working Group on Building Public Trust in the Ameri-can Justice System. The guidelines are provided to jurisdictions as a best-practices guide to avoid creating debtors’ prisons in the ordinary course of administering justice.

Resolution 104C supports an interpretation of the Affordable Care Act that would include discrimination on the basis of sexual orientation and gender identity in the definition of sex discrimination.

Resolution 106A condemns “the harassment, arbitrary arrest and detention, arbitrary disbarment, denial of due process, other ill-treatment and killings of judges, lawyers, other members of the legal profession and their extended families throughout the world for serving in their designated capacities.”

Resolution 106B recognizes groups outside the legal profession for the “important role that nonlawyer human rights defenders, journalists and others play in protecting justice and the rule of law” and saying the ABA “deplores attacks on those professions, as well as on individuals, aimed at silencing or intimidating human rights voices.”

Resolution 118 supports transgender service members in the military and calls on the federal government “to recognize that service by persons who otherwise meet the standards for accession or retention, as applicable, in the United States Armed Forces should not be restricted, and transgender persons should not be discriminated against, based on gender identity.”

Resolution 113 offers model rules of conduct for administrative law judges and urges jurisdictions to adopt ethical principles consistent with those model rules. State ALJs aren’t covered by judicial conduct rules for judicial-branch judges, but many states don’t have adequate rules for protecting their independence, North Carolina chief administrative law judge Julian Mann III told the House. Mann said ALJs are subject to executive-branch control, which puts them outside the ambit of state judicial conduct codes and makes them vulnerable to inappropriate interference from executive-branch officials. Most often, ethical rules that apply to lawyers apply to ALJs, he said, even though they’re not designed for people in judicial roles.

This article was published in the October 2018 ABA Journal magazine with the title "A Busy 2 Days."