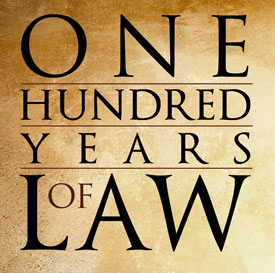 It goes without saying that the world was a vastly different place in 1915 than it is today. But while the events of that year now carry the echoes of history, they also predicted some of the upheaval of the coming century.

A year earlier, the outbreak of war in Europe, which quickly spread to the Middle East, Africa and parts of Asia, had shattered the last lingering vestiges of innocence that characterized the Victorian Age. But in 1915, World War I—called the Great War because no one imagined such a conflagration could happen again—unleashed the horrors of modern warfare. During that year, Germany introduced poison gas as a weapon, and 1,198 passengers died when the Lusitania was sunk on May 7 by a German submarine. By the end of the year, the British Army had begun testing the first prototype tanks.

In the United States, meanwhile, President Woodrow Wilson continued to assert his commitment to keep the country out of the war. In many ways, the nation still inhabited the spirit and values of a predominantly rural 19th century society rather than the urban industrial landscape that would come to characterize the 20th. The Civil War, for instance, was still vivid in the American mind: Even one of the U.S. Supreme Court’s most distinguished members, Oliver Wendell Holmes Jr., had been wounded—three times—during his service in the Union Army.

In January 1915, the House of Representatives rejected a proposal to give women the right to vote. And in February, The Birth of a Nation became one of the earliest film blockbusters but also raised controversy for its negative portrayal of blacks and its glorification of the Ku Klux Klan.

But 1915 carried hints of change, as well. In January, the first coast-to-coast telephone call was made by Alexander Graham Bell in New York City and his assistant Thomas Watson in San Francisco. In February, the first stone of the Lincoln Memorial was put into place.

Babe Ruth hit his first major league home run. Ford rolled the millionth car off its assembly line at the River Rouge plant in Detroit. And on Oct. 25, Lyda Conley became the first Native American woman to be admitted to practice before the Supreme Court. 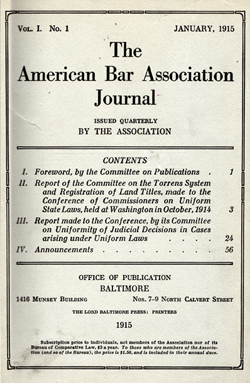 January 1915: The first issue of the ABA Journal.

The American Bar Association was perhaps thinking about the future as well at its 1914 annual meeting when the executive committee was authorized to provide for the publication of a journal with announcements and transactions of the association, including the work of various affiliated bodies. The committee “took favorable action, and the establishment of the quarterly, of which this constitutes the first number, is the result,” states the foreword to the ABA Journal’s first issue, which was published in January 1915. “The Journal will henceforth be sent to every member of the American Bar Association, without any additional charge. He pays for it by paying his annual dues, which are now $6.” The main articles in that first issue were committee reports to the Conference of Commissioners on Uniform State Laws. The issue carried one advertisement, a special offer to ABA members from the Lord Baltimore Press to purchase the Court of Claims Digest for $5.

Just five years into publication, the format was changed “radically” by the executive committee, which voted in 1920 to make the publication “representative of the ideals of the American Bar Association and such as will attract and interest the members of the whole profession.”

Much has changed about the Journal—along with the law, society and the world—since that first issue. “The ABA Journal’s development as the nation’s leading legal news source reflects the broadening scope and evolving needs of our changing profession during the past century,” says ABA President William C. Hubbard. “Looking forward, the legal profession must continue to implement new ways to improve our service to clients and expand access to justice for all. As the profession continues to evolve, lawyers worldwide will learn from the ABA Journal about innovations in the law and the delivery of legal services. The profession depends on the magazine’s enduring commitment to reporting about the practice of law in print and online.”

In this special issue, the Journal marks its centennial by highlighting what the editors have chosen as the key legal developments of each decade of the magazine’s existence. If you don’t agree with our choices, we’re counting on you to tell us so in your letters and online comments.

Click on the headlines below in order to be taken to an article about legal landmarks in each decade:

This article originally appeared in the January 2015 issue of the ABA Journal with this headline: “One Hundred Years of Law: Since January 1915, the ABA Journal has borne witness to monumental developments in the law and the profession.”