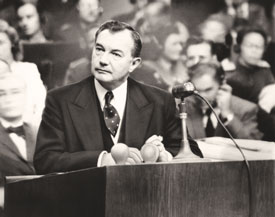 Robert H. Jackson was one of America’s most illustrious lawyers during the mid-20th century. In 1934, President Franklin D. Roosevelt, a fellow New Yorker, appointed Jackson to serve as general counsel of the Bureau of Internal Revenue. Jackson later served as solicitor general and attorney general; in June 1941, Roosevelt nominated him to the U.S. Supreme Court, on which he served as an associate justice until his death in 1954.

But the pinnacle of Jackson’s career came on Nov. 21, 1945, in the Palace of Justice, one of the few major buildings in war-ravaged Nuremberg, Germany, that had not been destroyed by Allied bombers. As head of the U.S. prosecution team for the trial of 23 members of the political and military hierarchy of Nazi Germany, Jackson gave an opening statement on that day that not only set the tone for the trial but also articulated legal principles that the international community has been striving to implement ever since.

Jackson described the International Military Tribunal, which also included the United Kingdom, France and the Soviet Union, as “the first trial in history for crimes against the peace of the world. … The wrongs which we seek to condemn and punish have been so calculated, so malignant and so devastating,” he said, “that civilization cannot tolerate their being ignored, because it cannot survive their being repeated. That four great nations, flushed with victory and stung with injury, stay the hand of vengeance and voluntarily submit their captive enemies to the judgment of the law is one of the most significant tributes that power has ever paid to reason.”

At the end of the nearly yearlong trial, the Allied judges acquitted three of the Nazi defendants. Seven were given prison terms and 12 were sentenced to death (one in absentia).

The 13 Nuremberg trials set a precedent that for decades was never followed, and the Nuremberg principles —a commitment to holding individuals responsible for committing war crimes, genocide and other violations of international criminal law in the course of armed conflicts—became an unfulfilled goal as the major powers preoccupied themselves with the Cold War.

The Cold War began to fade in 1989 as the Soviet bloc broke apart, but the world continued to be a violent place. Estimates put the total number of deaths in the two world wars at some 80 million people. But since the end of World War II, there have been more than 300 smaller conflicts in various parts of the world, resulting in some 100 million deaths, most of them civilian.

The U.N. Security Council created the first entities since Nuremberg to prosecute for violations of international criminal law, such as the atrocities in the Rwandan and Balkan conflicts. AP Photo

In the early 1990s, bloody conflicts involving widespread atrocities broke out in the Balkans and Rwanda that the world community could not ignore. In 1993, the U.N. Security Council created the International Criminal Tribunal for the former Yugoslavia, and a year later the Security Council established the International Criminal Tribunal for Rwanda. They were the first entities created to prosecute and try individuals for violations of international criminal law since the Nuremberg trials nearly a half-century earlier, and they sparked a renewed interest in the creation of a permanent tribunal to handle such cases.

To the surprise even of advocates, the International Criminal Court was created under a statute finalized in Rome on July 17, 1998. The court came into existence on July 1, 2002, and established its headquarters at The Hague, Netherlands. The Rome Statute has been ratified by 122 nations; three notable holdouts are China, Russia and the United States, although relations between this country and the ICC have warmed considerably in recent years.

More than a decade after its birth, the ICC is one of the most notable achievements of international law—and politics—in recent decades. While the court faces political and funding challenges, David Scheffer, a law professor at Northwestern University who led the U.S. delegation at the Rome conference and served as the first U.S. ambassador-at-large for war crimes issues during the Clinton administration, notes that “international criminal justice is, by definition, a long-term project, and one must sustain a long-term vision, particularly for the ICC, to realize the full potential it offers for the future.”