Taming Titans: Let’s Have a Little Fanfare for the Common Man 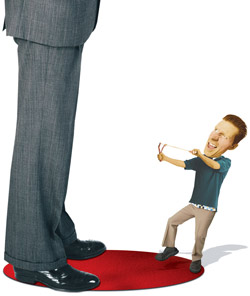 Trying to get a straight answer from a bureaucracy or a fair shake from a speed-camera system is often a long shot at best. Bureaucrats are not vested in your issue, nor are automated systems interested in whether justice is being done.

So occasionally the Davids of the world need to tweak the noses of the Goliaths and prove that sometimes size doesn’t matter.

One such “David” is actually a Patrick, as in Patrick Rodgers of West Philadelphia. He took on banking giant Wells Fargo in a dispute and, with a bit of legal derring-do, the nonlawyer brought that giant down—a few notches, anyway.

In 2009 Rodgers received notice that his home insurance premium would more than double because Wells Fargo insisted that the house he purchased for $180,000 in 2002 would cost $1 million to replace. So he sent a written request for more information via registered mail.

When WF failed to reply within two legally prescribed deadlines, Rodgers took the matter to court, where WF failed to appear. Rodgers was awarded a default judgment of $1,000 and WF was given 30 days to pay, which it didn’t.

From there, it was on to the sheriff’s office, where Rodgers obtained a levy, which meant that all property in the local WF office could be auctioned off to pay the judgment.

Rodgers had effectively foreclosed on Wells Fargo. The parties reached an out-of-court settlement earlier this year.

Our other David is Will Foreman, an Oxon Hill, Md., shop owner whose delivery trucks were photographed by speed cameras more than 40 times. In April, he had his fifth ticket dismissed after he was able to prove his case with simple mathematics.

The system snaps two photos—0.363 seconds apart—of vehicles traveling at least 12 mph over the posted limit. Foreman digitally superimposed the pics and, using the vehicle’s length as a frame of reference, figured the distance traveled from one pic to the next. This allowed him to calculate the speed, below the 12 mph threshold.

Thanks, Patrick and Will, for pursuing justice—not just for yourselves, but for anyone who’s ever felt helpless against a Goliath.