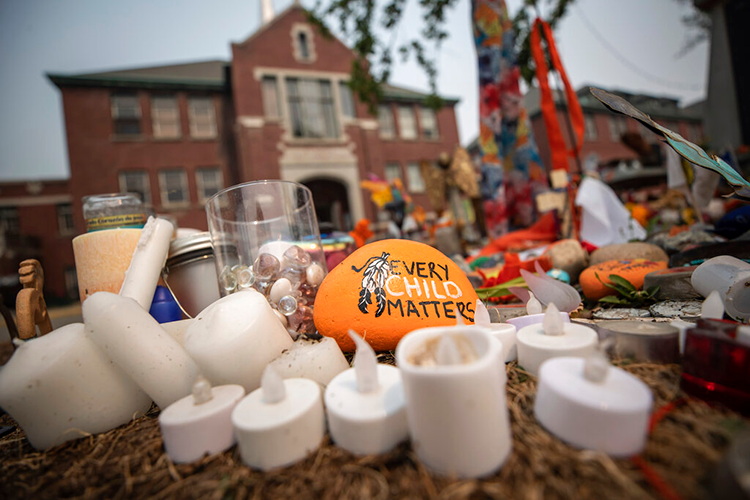 International attention was drawn in May to the issue of the abuse at boarding schools for indigenous children after the bodies of 215 children were found in unmarked graves near the former Kamloops Indian Residential School in Kamloops, British Columbia. Shown here is a memorial outside the former school. Photo by Darryl Dyck/The Canadian Press via AP.

The ABA House of Delegates voted Monday in favor of a resolution calling for an investigation into human rights abuses at American Indian boarding schools after the president of the Canadian Bar Association appeared in person to support the resolution.

The ABA House’s action follows the discovery in May of 215 children’s remains in unmarked graves at the site of one of Canada’s largest residential schools for indigenous children. Hundreds of other graves have been found since. The discovery prompted outrage worldwide and calls for the United States to launch an investigation into abuses stemming from its own residential schools for Native American children. 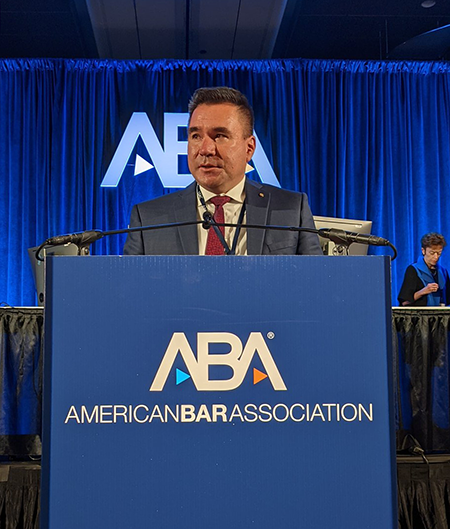 Regehr’s voice broke as he described how his grandfather was a survivor of the residential school system in Canada. He added that he is a survivor of the “Sixties Scoop,” a program enacted to take indigenous children from their homes and place them in non-indigenous foster homes.

He said the discoveries of the remains of the children, some of whom were as young as 3, “hit me hard, and it hits and continues to hit many indigenous people hard.”

Regehr added, “But it also hit many Canadians hard for the first time ever. It made the stories true.”

Mark I. Schickman, a delegate with the Civil Rights and Social Justice Section, introduced the resolution. He noted how children were taken from their homes, never to be seen by their parents again. He said the children lived in appalling and unsanitary conditions, and suffered sexual and physical abuse. He noted that children were sometimes tasked with building coffins for other children who died and were then buried on school plots.

“Putting a light on what is occurring here is so critical because we know that if we do not learn from this history, we are doomed to repeat it,” Schickman said.

The resolution adopted Monday urges organizations and governments to cooperate with the Department of the Interior’s Federal Indian Boarding School Initiative and hand over school records to help uncover the truth of what happened at the boarding schools.

“The forced assimilation and attempted eradication of Native people through compulsory ‘residential schools’ resulted in the loss of life, the loss of a generation of relatives, language speakers and culture bearers,” Resolution 801’s report states.

U.S. Department of the Interior Secretary Deb Haaland announced the initiative in June. An enrolled member of the Laguna Pueblo and the first Native American to serve as Cabinet secretary, her maternal grandparents were forced into boarding schools when they were children.

“Though it is uncomfortable to learn that the country you love is capable of committing such acts, the first step to justice is acknowledging these painful truths and gaining a full understanding of their impacts so that we can unravel the threads of trauma and injustice that linger,” Haaland wrote in an op-ed for the Washington Post in June.

Conceived in the 1800s to assimilate Native American children, there were more than 175 boarding schools and 300 day schools in the U.S. by 1909, according to the resolution. They existed until the 1960s.

In July, the remains of nine children who died at the Carlisle Indian Industrial School in Pennsylvania more than a century ago received a proper burial at Rosebud Sioux Tribe Veterans Cemetery and family cemetery plots, the Sioux Falls Argus Leader reported. 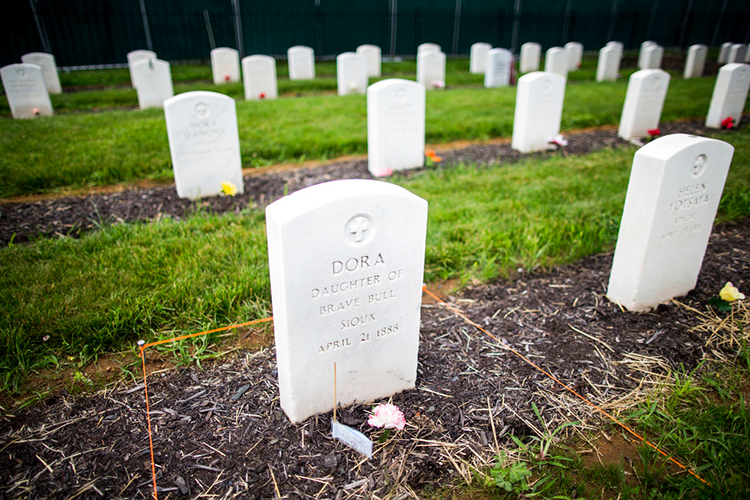 The cemetery at the Carlisle Indian Industrial School in Carlisle, Pennsylvania, holds the bodies of children who died at the school. Photo by Sean Simmers/The Patriot-News via AP.

“Many of these children died of illness, owing to the unsafe, unsanitary conditions which were commonplace at such institutions. Others died attempting to escape the abuse endured at Carlisle,” Resolution 801’s report states.

Lawmakers should fully fund the initiative and give it subpoena power to investigate, the resolution adds. It also urges Congress to enact a bill called the Truth and Healing Commission on Indian Boarding School Policy Act and create a commission to lead an investigation.

Resolution 801 also calls for the repatriation of “all relevant items and remains.”