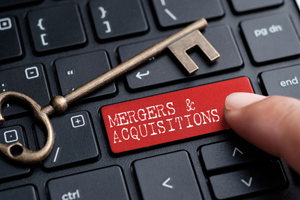 Neither Boies Schiller Flexner nor Quinn Emanuel Urquhart & Sullivan are embracing a legal recruiter’s suggestion that the two firms should merge. Boies Schiller told Thomson Reuters Legal that the report on options for the law firm, conducted by the founder of BCG Attorney Search, “was entirely unsolicited” and “was done without our knowledge or our participation.” Quinn Emanuel also issued a statement. “Our firm has never done a merger and, as much as we admire BSF, it’s unlikely we would change that policy,” the law firm said. (Thomson Reuters Legal)

A law firm that employs the brother of President Joe Biden as an adviser ran an Inauguration Day advertisement highlighting the presidential connection. The Berman Law Group ad highlights its environmental lawsuit against sugar cane growers who use controlled burns. According to the ad, the suit was filed “against the backdrop of incoming President Joseph Biden Jr.’s commitment to environmental and social justice, a value shared by his brother and Berman Law Group senior adviser, Frank Biden.” Frank Biden told CNBC that he has long been an advocate of social justice, and he doesn’t use his brother’s name to obtain clients. White House press secretary Jen Psaki didn’t specifically address the ad but said it is against White House policy to use the president’s name in connection with commercial activities. (CNBC, the Washington Post)

Judge Carlos Lucero of the 10th U.S. Circuit Court of Appeals at Denver has announced that he is transitioning to senior status, giving President Joe Biden a fourth appellate judgeship to fill. A second appeals judge taking senior status is Judge Robert Katzman of the 2nd Circuit at New York. They are among 17 judges who have announced that they will take senior status since President Donald Trump left office. (Law360 here and here, Bloomberg Law)

Acting U.S. Attorney General Monty Wilkinson has rescinded a Department of Justice policy requiring prosecutors to file the most serious, readily provable charges possible against offenders. The policy, enacted by former U.S. Attorney General Jeff Sessions, also required prosecutors to disclose to the court all factors that impact sentences. “The goal of this interim step,” Wilkinson said in a memo, “is to ensure that decisions about charging, plea agreements and advocacy at sentencing are based on the merits of each case and reflect an individualized assessment.” (Law360, the Huffington Post)