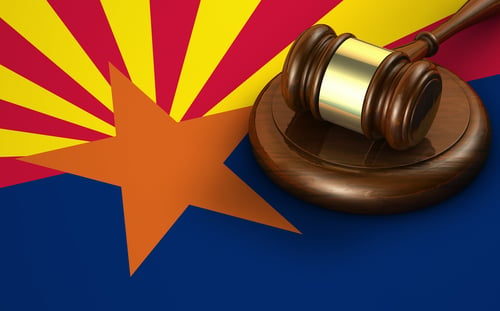 Arizona Attorney General Mark Brnovich has reached a diversion agreement with the State Bar of Arizona to resolve ethics allegations that he took actions contrary to the interests of state agencies represented by his office.

Brnovich called the deal “a victory for the rule of law” and claimed that the complainants were “attempting to weaponize the system for regulating lawyers for their own political purposes,” he said in a statement Friday, Law360 reports.

The Arizona Capitol Times and the Associated Press also have coverage.

Brnovich is a Republican running for the U.S. Senate. One of the complainants was Secretary of State Katie Hobbs, a Democrat running for governor who took a stand against election fraud claims by former President Donald Trump, according to CNN.

Hobbs had claimed that Brnovich’s office received confidential attorney-client information from her office during election lawsuits. Then Brnovich’s office withdrew from the suits and represented a different party in the same litigation that took a position adverse to the secretary of state, she said.

Hobbs contended that Brnovich was sabotaging election-related cases, according to a prior report by the Arizona Republic, noted at the Election Law Blog.

The other agency that complained was the Arizona Board of Regents. The state attorney general had sued the board over Arizona State University’s deal for a hotel and conference center on university property.

The Arizona Republic reported that the ethics case “represents more than a squabble between partisan rivals.” The dispute “goes to whether the attorney general has adequately represented the state’s interests, including those of an office with which it is fundamentally at odds,” the newspaper reported.

Brnovich plans to seek a change in ethics rules to say his duties as attorney general are different than those of a private lawyer hired by a client, according to the Arizona Capitol Times.