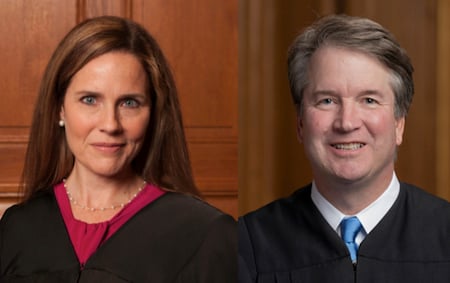 Three conservative dissenting justices have called on the U.S. Supreme Court on Monday to hear a challenge to the 2020 presidential election in Pennsylvania.

But two of former President Donald Trump’s appointees were not among them: Justices Amy Coney Barrett and Brett M. Kavanaugh. Nor did Chief Justice John G. Roberts Jr. join the conservative dissents, report the Washington Post, the New York Times and the National Law Journal.

The Pennsylvania cases were among several election challenges that the Supreme Court declined to review Monday.

Justices Samuel A. Alito Jr., Clarence Thomas and Neil M. Gorsuch dissented in two Pennsylvania cases. They argued that the Supreme Court has to hear the cases to determine whether the Pennsylvania Supreme Court had the authority to extend a deadline for mail-in ballots that had been set by the state legislature.

One issue is whether the extension violated the U.S Constitution, which authorizes state legislatures to set the time, place and manner of federal elections.

Although Kavanaugh did not dissent Monday, he has previously indicated that, under the Constitution, “state courts do not have a blank check to rewrite state election laws for federal elections.”

It takes four votes for the Supreme Court to grant certiorari, the Washington Post pointed out.

They all said the case should be heard, even though a ruling against the extension would not change the outcome of the presidential election results in Pennsylvania. The constitutional issue should be decided because it will likely resurface, they argued.

Thomas’ dissent has been criticized by Democrats, who say it embraced claims advanced by Trump that absentee ballots can enable vote fraud, USA Today reports.

“Because fraud is more prevalent with mail-in ballots, increased use of those ballots raises the likelihood that courts will be asked to adjudicate questions that go to the heart of election confidence,” Thomas wrote. Refusing to hear the Pennsylvania case now “is befuddling,” he wrote.

In a post at the Election Law Blog, Rick Hasen, a professor at the University of California at Irvine School of Law, said the issue “is a ticking time bomb” that the Supreme Court will have to resolve.

He pointed to his op-ed for the New York Times, where he wrote: “Mr. Trump and his allies have advanced a muscular version of something that’s become known as the ‘independent state legislature’ doctrine. Taken to its extreme, the doctrine says that state legislatures have complete authority to set election rules absent congressional override, and that their power to set election rules cannot be overcome even by state supreme courts applying right-to-vote provisions in state constitutions.”

Hasen said he sees an impact on voting rights if the Supreme Court eventually agrees that state legislatures have such powers. In such a case, “neither state nor federal courts are likely to be able to play a backstop role when Republican state legislatures pass new restrictive voting laws,” Hasen wrote for the New York Times.

Hasen said the Supreme Court may have declined to hear the Pennsylvania cases because it would rather resolve the issue in a live case or because “the Trump cases are somewhat radioactive at the court” given Trump’s false claims of a stolen election, according to the Election Law Blog post.

ABAJournal.com: “Supreme Court puts off action on Trump-related cases; is it waiting for the clock to run out?”