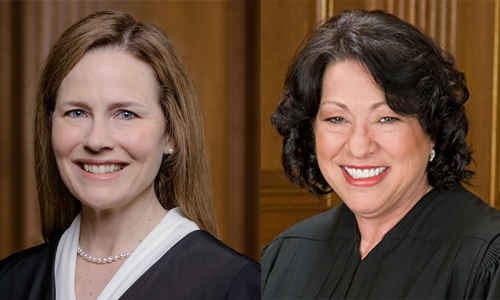 In separate appearances this week, U.S. Supreme Court Justices Amy Coney Barrett and Sonia Sotomayor discussed the challenges of being a public figure, political polarization and collegiality on the high court.

According to the Washington Post, Barrett and Sotomayor “made a similar plea—read the justices’ opinions—as the court faces a divisive term in which they will consider expanding gun rights and limiting abortion rights, among other controversial topics.”

Barrett said there is a misperception that it’s the result that matters when cases are decided, according to coverage by Law360. “But that’s not how the court works,” Barrett said.

Barrett appeared at the Ronald Reagan Presidential Library on Monday, while Sotomayor spoke at the Washington University in St. Louis on Tuesday. Other stories on Barrett’s appearance are by the Associated Press and CNN. The AP and the St. Louis Post-Dispatch are among the publications that covered Sotomayor.

Both justices also touched on the topic of collegiality.

Barrett said she was grateful for “the tremendous collegiality and respect” that the justices show one another.

Asked about political polarization in society, Sotomayor said she tries to remember the lesson that her mother taught her—always try to bring out the best in people.

“I try very, very hard to see the good in them because there’s good in every one of them,” she said.

Sotomayor added that she has different views from many of her colleagues, “probably the majority right now.” The line produced a laugh, the Associated Press reported. Sotomayor is one of three liberal justices on the nine-member court.

Barrett said she misses being “just Amy” from Indiana, but she and her husband recognized the challenges that they would face, according to Law360.

She described a conversation that she had with her husband. He told her that she would face a hard confirmation process and more difficult things if she was confirmed. There could be no looking back, he told her.

“So that was kind of our mantra: ‘Burn the boats,’” Barrett said. “And as things get hard, we’d say, ‘We burned the boats. No looking back.’”

Sotomayor also talked about difficulties that she faced after her nomination.

“When I was being nominated, people said I wasn’t smart enough to be on the Supreme Court,” Sotomayor said. “It felt like: What’s enough, and when is it enough?”